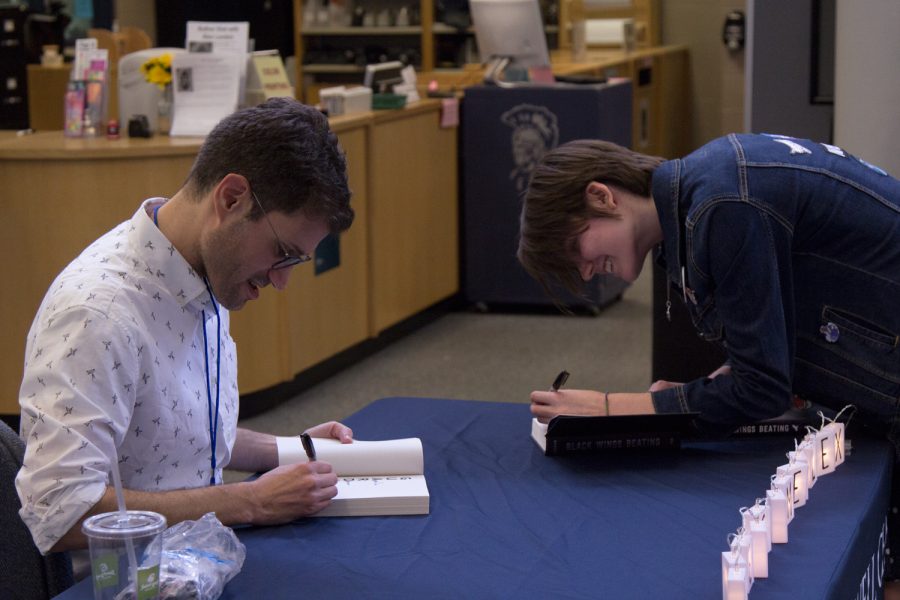 Alex London and Amelia Nenninger sit across the table signing books. Nenninger was the student who got to introduce London and his presentation.

10:07 on Tuesday morning, in the Learning Commons. Plastic chairs were set up in perfect rows, all pointed towards a stage. It was silent except for the buzz of the overhead lights, and in the corner, author Alex London prepared for his presentation about why he writes.

He published his first book, “We are Not Eaten by Yaks” in 2011, but that took time, patience and resilience.

“I started writing [my first book] when I was 21, I didn’t finish what I thought was the final draft until I was 25,” London said. “And then it wasn’t published until I was 27. I think we got 37 rejections from 36 different publishers. One publisher rejected it twice.”

Despite the rejection, London was able to stay positive, and his favorite word ー ballyhooー encapsulates that.

“A ballyhoo is a celebratory sound,” London said. “It comes from the carnival world. So a carnival barker who [says] ‘Step right up and come inside’, that’s a ballyhoo. So it’s a sort of overly cheerful hype word. I think that sums me up, I’m overly cheerful and overly enthusiastic, and overly caffeinated and I feel like ballyhoo captures that.”

Up until 2013, London had written strictly children’s books, but with the release of “Proxy,” he successfully published a book in a new genre. He made this switch because of the amount of potential young people have.

“I truly believe young people have the power and capacity to change the world in a way that adults can’t even imagine,” London said. “It’s always the next generation that find [they’re] going to inherit the world.”

One of the goals he has is to give teens access to the inspiration they need to do great things.

He also believes writing for teenagers is a way for them to feel represented.

“Have you ever read something and felt seen?” London said. “I really remember what it’s like to be a teenager. I didn’t really fit in at high school, I was changing my hair, my personality. I didn’t want anyone to see the real me. If [a story can] make them laugh on a sad day or give them a few hours to escape or in a larger sense feel the humanity or feeling seen or less alone, if I get to do that as a job, that’s fantastic.”

One of the many teens he inspired is junior Amelia Nenninger. She introduced him at the presentation and was very excited to do so.

“I was shaking, I was so nervous,” Nenninger said. “I was emailing him awhile beforehand and we were talking and he remembered me. I was like, ‘Oh my goodness,’ I didn’t think that was going to happen.”

In terms of how Nenninger got to introduce one of her favorite authors, she said the opportunity was simply given to her.

“No, [I didn’t sign up for it],” Nenninger said. “A teacher recommended me for it. They gave me a script with facts and things to read about what he’s like. It was really cool.”

Inspiration is something that cannot be forced. For London, he pulls ideas from all around him.

“I get ideas from staring out windows, I get ideas from daydreams. I get ideas from video games, and TV shows, and books, and art and people,” London said. “I got the idea for my first young adult novel, “Proxy” ー which was a Gateway book, so yay Missouriー from buying socks on the internet and realizing that I was being tracked across the internet by a sock company. [I was] thinking, ‘Whoa’ technology is kind of getting out of control.”

Success is not something that authors expect when they’re first starting out, in fact, authors like London are very critical of their work.

“You can’t write well without writing badly first,” London said. “I feel so lucky every day that anyone gives a damn about the stories I have to tell. I wake up every day and I daydream stories that mean something to me, and the fact that they would mean anything to anyone else, let alone hundreds of thousands of people, it blows my mind. There’s nothing humans have that are more sacred than shared stories.”

London went on to explain that revision is a big part of writing, and it often takes longer than composing the story.

“I [revise] for months and months,” London said. “For every book I do, I write six, seven, sometimes eight drafts to get it just right. It can always be clearer, there can always be a slightly better turn of phrase.”

Those months of revision are all to ensure that the reader can clearly imagine what is occurring in the scene.

Nenninger explained that she was excited to meet him and for the release of his new book.

“He was nice,” Nenninger said. “He was shorter than I thought though, but [I got a signed copy], I’m excited for the second [book] to come out too.”

Despite all the months of stress, tears, and hard work, London feels that writing will always be worth it because they can help teenagers feel included.

“Books did a lot for me when I was younger, I felt seen,” London said. “You read a book and you see yourself in it. It can kind of cure you of that loneliness that it is to be human and alive. We’re trapped in these limited failing bodies, dreaming of bigger, but we’re still limited in ourselves. Books are a way of breaking through that and getting into another mind and realizing we’re not as alone as we thought ourselves to be.”