A Season of Firsts

The girls basketball team has placed first in three tournaments, is currently 13-0, and ranked number one in the area. 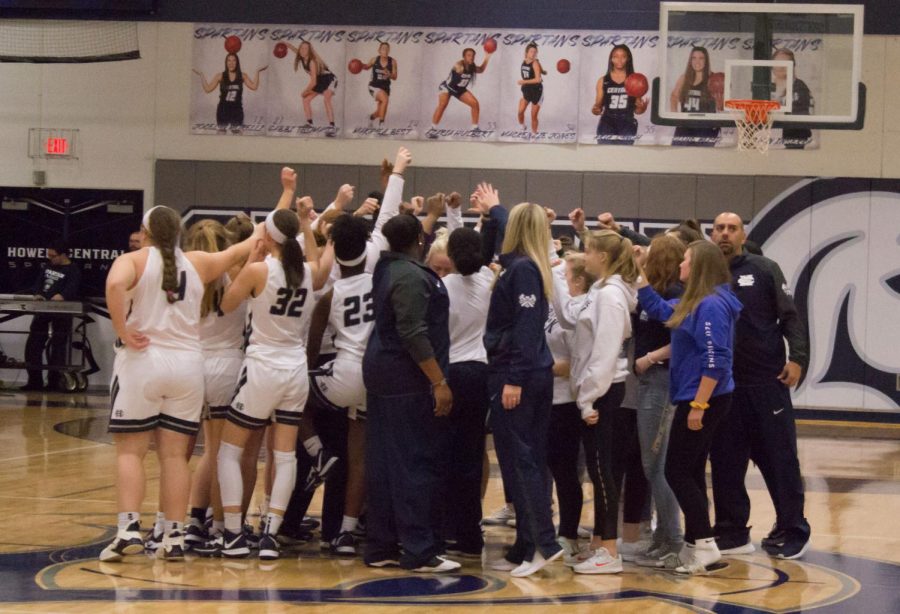 The girls basketball team celebrates a win at center circle after defeating GAC South opponent Troy Buchanan High School. The team improved to 12-0 after this win.

13-0. One of the best season records thus far in program history. Three tournament wins. Facing different opponents every tournament and each time earning some hardware as a result of their efforts. Ranked #1. For the first time in program history, coming from being unranked at the beginning of the season and rising to the very top of the St. Louis Large schools list. This is Spartan girls varsity basketball. This is elite.

As of Friday, Jan 10, the girls basketball team added another win to their score book against the Francis Howell North Knights. In what was a close game in the first half, North ending the half with a three-pointer to tie the Spartans, junior Sofia Tweedie remained composed.

“We’re not really used to that, not to sound cocky, but we’re not used to [being tied],” Tweedie said. “So, we were like, okay, let’s just stay within ourselves, not spaz out.”

This calm and composed attitude that the team takes in situations like this are key if they are to achieve their goal for the season: beating the program record of 15-0. The team has to tackle down three more wins to beat this record, but it will be no easy task. Senior Gabbi Thomason knows what having zero losses on your record does to other teams. Teams like North who came out hard in the first half against the Spartans.

“We know that every game we’re going to get the other team’s best on every night because we have a target on our backs,” Thomason explained. “So, we were expecting them to come out and play their best against us, so we just knew that we had to stay calm and be ready for that.”

Even with all their accomplishments this season, the team is far from satisfied with their performance thus far. Losing two star seniors from last year, the team faced many who doubted them at the beginning of the season, and not they are out to prove them wrong.

“I think it’s all the people that doubted us this year because we lost size, and I think just coming out and starting off really well and being 4-0, 5-0, and just increasing,” Tweedie said. “Realizing that we haven’t lost a game yet, and the record is 15, and we’re trying to break that; I think that’s what keeps us motivated and practicing really hard together has gotten us really far this year.”

For this program motivation is key. With three players this year out due to torn ACL injuries, senior Aria Lynch among them, supporting other teammates and motivating each other has been a big focus this season. Knowing that every player has a role, some different than the roles they are used to, that impacts the level of play that the team competes in is what aids in this motivation to be the best.

“Teamwork, working together as a team … Coach Leake definitely stresses cheering whenever somebody gets a block or whenever they get a steal,” Lynch said. “You have to physically show your excitement for them and like, that’s what gets us, like, into the game more, even if you’re on the bench, you have to cheer because I’m not playing obviously, but we’re going crazy on sidelines.”

Tonight the Spartans will be taking on the Vikings of Francis Howell High, JV at 5:30 p.m. and varsity at 7 p.m at home. They look to improve to 14-0 and have been preparing for the game appropriately; studying film, running plays, and changing up their defensive play.

“We talk to each other and like get into our little huddle and talk about it,” Lynch said. “We’re just hyping ourselves up basically, like ‘we got this,’ ‘don’t let them get into your head, just stay focused on the goal,’ that we’re visually working towards.”