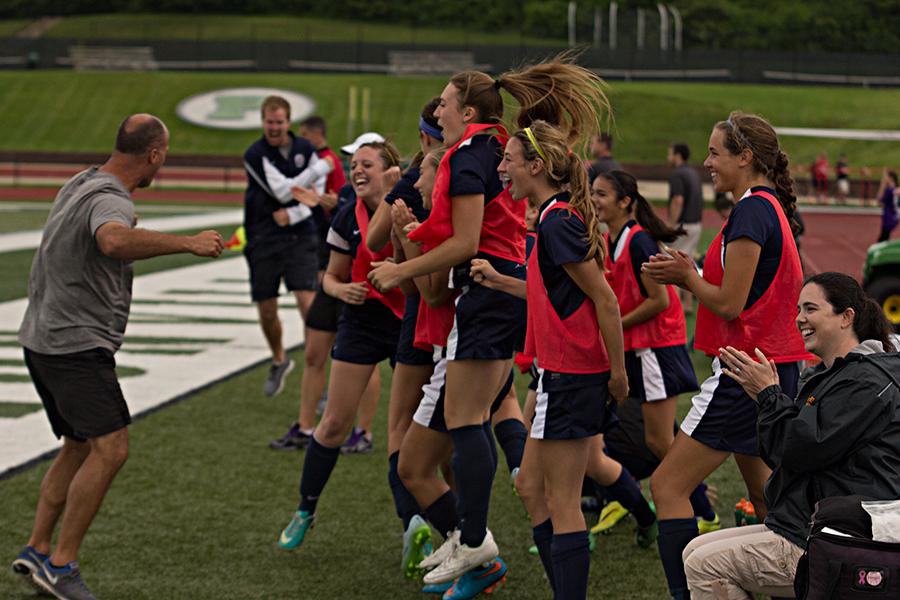 Coach Derek Phillips and the girls soccer team celebrate after senior Caitlyn Eddy scored from 30 yards out to give the Lady Spartans a 1-0 lead over the Pattonville Pirates on May 30. The Lady Spartans would add another goal later in the second half to seal their trip to the state semifinals on Friday. (Zach Grau)

Coach Derek Phillips and the girls soccer team celebrate after senior Caitlyn Eddy scored from 30 yards out to give the Lady Spartans a 1-0 lead over the Pattonville Pirates on May 30. The Lady Spartans would add another goal later in the second half to seal their trip to the state semifinals on Friday.

On Thursday morning, the girls soccer team will board a bus to try to improve upon the performance of the boys soccer team when it went to Kansas City in November. When they get there, they will find the same foe the boys team met in Kansas City for the Class 4 state semifinals: Lee’s Summit High School.

The team punched its ticket for state with a 2-0 victory over Pattonville and improved its record to 23-2 (a school record for wins in girls soccer) on the back of goals from senior Caitlyn Eddy and freshman Bailey Beeler. Junior goalkeeper Sydney Chalcraft posted her fourth consecutive shutout for the win. Eddy’s goal came on a 30-yard rocket, while Beeler finished after a free kick was floated into the penalty area and fell to her after a scramble.

The Lady Spartans will face Lee’s Summit on Friday at 6 p.m. In the other semifinal, St. Joseph’s will take on St. Teresa’s Academy. The winners will face off in the state title game on Saturday at 4 p.m., with the semifinal losers playing the third place game at noon Saturday. 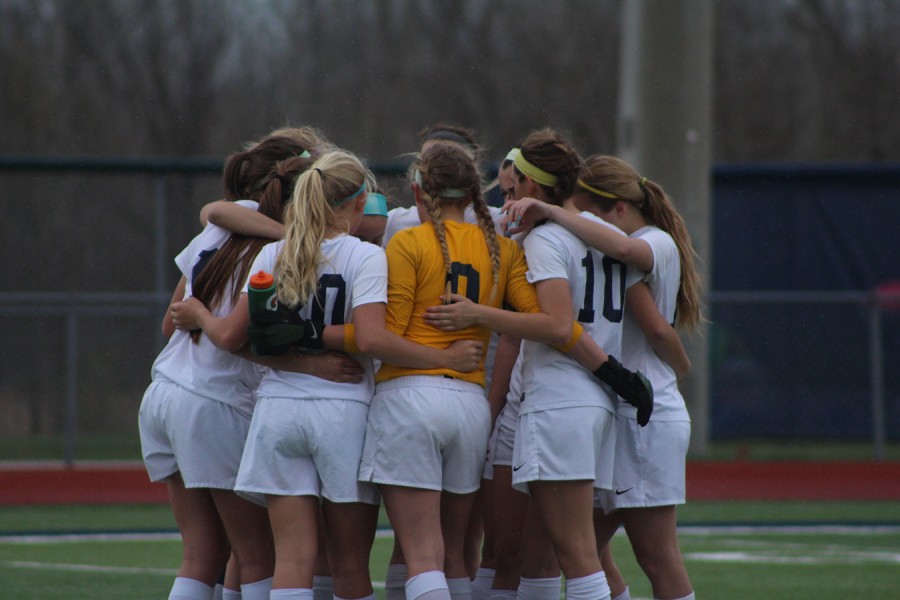 It’s more than a game

Girls soccer game against Timberland dedicated to loved ones who inspired team members.

The undefeated girls soccer team looked for another source of motivation this week. On May 5 the team played a dedication game, with the game serving as a chance for the girls to play for more than just the school, but someone who also inspired them off the field.

The girls were all asked to write letters to someone who inspired them and at halftime we will honor those people the team members wrote about. Coach Derek Phillips got this idea from a YouTube video on ESPN and had the team watch it together.

“The movie made me realize how easy it is to take everything I have for granted. By watching the stories of two young athletes like all of us, it was very emotional to see how fast everything can be taken away from someone so it made me really appreciate the people in my life who have helped me thus far,”  junior Madelyn Kreienheder said.

The girls soccer team played its final game in Blue Springs, Mo., against St. Teresa’s on June 6, which ended in a defeat in the Class 4 state title game, 6-1.

Throughout the game, the Spartans battled the 90 degree temperatures on the field, pushing every step of the way. The game ended in the Spartans being defeated at 6-1, earning them a second place title, the best finish in school history. Freshman Bailey Beeler scored the lone goal for the Spartans, who ended the season with a 24-3 record. 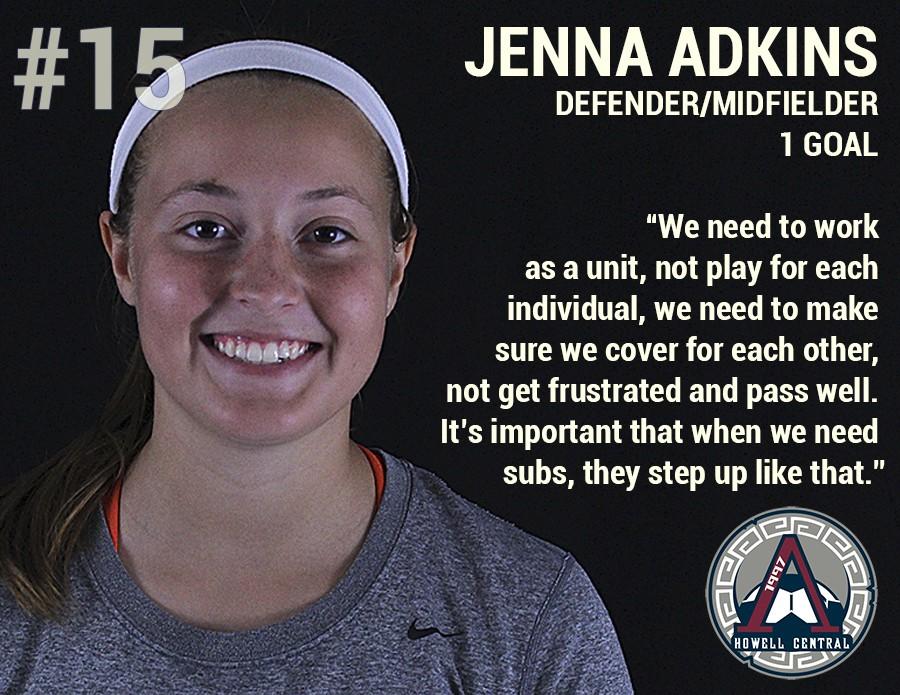 Get to know the girls soccer team

Twenty girls have helped out the girls soccer team on its road to the state finals in Kansas City this weekend. Get to know a bit more about them here. 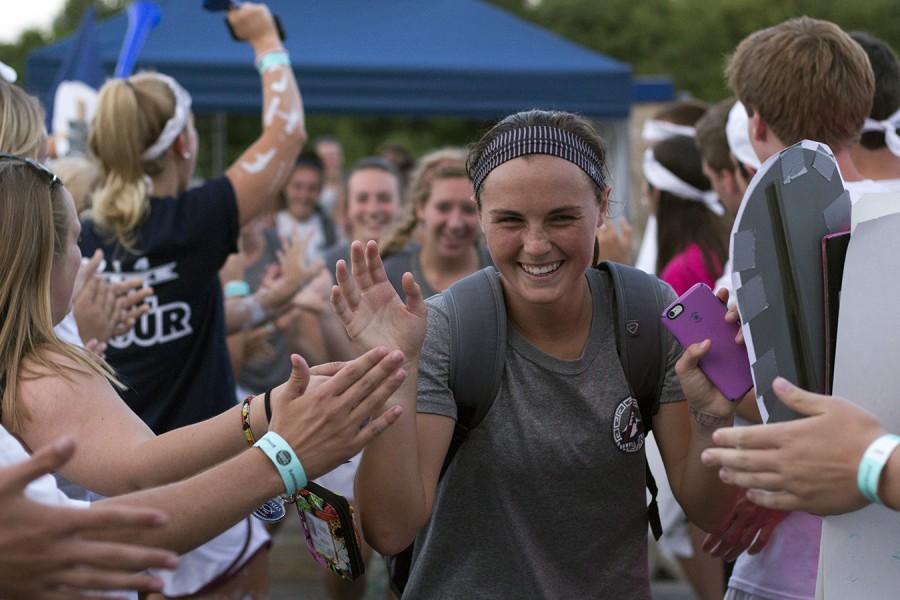 Girl’s soccer beat Lee’s Summit 2-1 in the semi finals, and play Saint Teresa on June 6 for the championship.

The girls will play at 4 p.m. in Kansas City during FHC’s graduation. 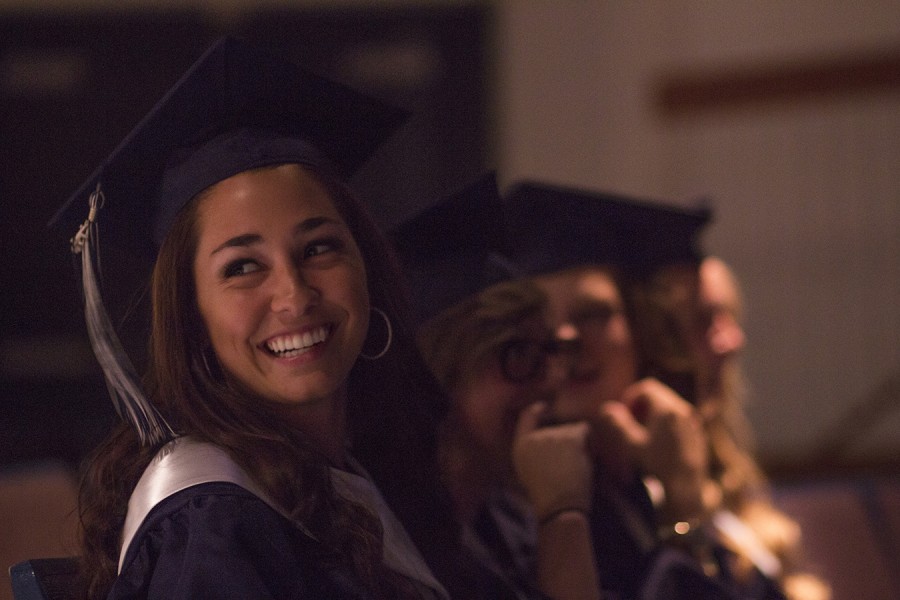 Graduation for the Final Four

Since the girl’s soccer team is heading to state on June 5th and 6th, that meant the four seniors on the team were going to miss graduation. FHC held a ceremony just for the girls, so they didn’t miss out on a big part of their high school career.

Senior Lauren Nosal said “Tonight meant more than anyone could imagine; it was an opportunity for me to get the best of both worlds. I get to play at state as well as graduate with my teammates. Thanks for all who made it possible.”

The girls walked away with their diplomas with the hopes of advancing in the final four on June 5.

Leave a Comment
Donate to FHCtoday.com
$25
$500
Contributed
Our Goal