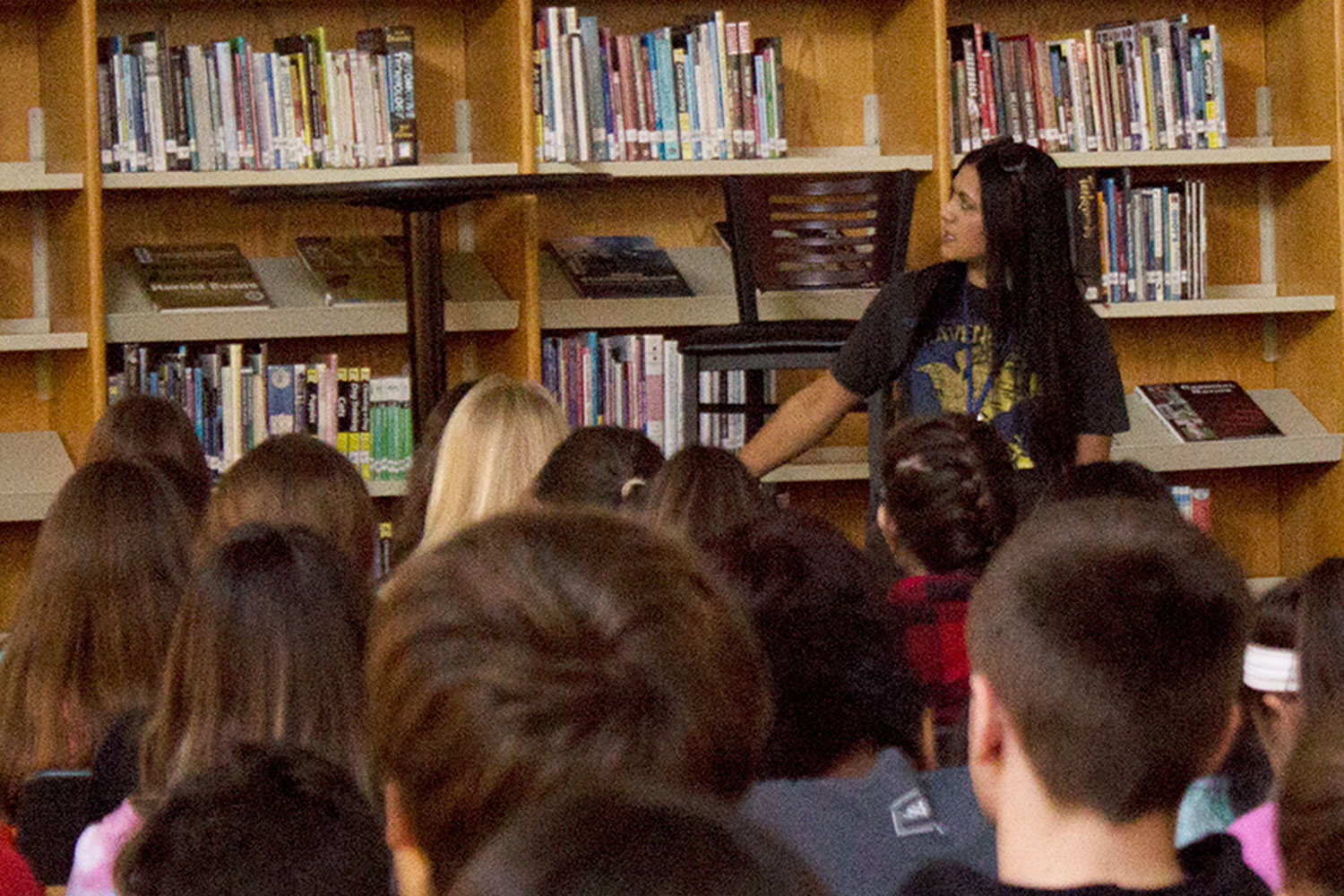 Sabaa Tahir speaks to a group of English students in the Learning Commons. Tahir visited our school to promote the second book in her series which gained a spot on the New York Times Best-sellers List. (Abby Bewig)

Sabaa Tahir speaks to a group of English students in the Learning Commons. Tahir visited our school to promote the second book in her series which gained a spot on the New York Times Best-sellers List.

After reading the first novel in her series, I met author, Sabaa Tahir, and found myself inspired by her unique normalness.

Waiting at the main entrance of the school, I wrung my hands as I awaited the arrival of Sabaa Tahir, the New York Times best-selling author, “and rightfully so,” I decided after finishing her book the night before. I did my best to keep a smile on my face as the worries came in waves. “What if she doesn’t like me?” “What if I don’t like her?” I stood there getting more anxious with each passing minute until we heard the buzz and saw her walk in. She was clad in black jeans, a graphic tee, and Doc Martens, and I was surprised at how normal she was. Before that moment, authors always had this sort of novelty about them, but for the first time I realized they are just people.

I showed Sabaa Tahir the way to the Learning Commons and prepared for the introduction I was to give once the presentation began. The author was bombarded by excited book lovers, school librarians, and Dr. Arnel, doing her best to politely answer every question they threw her way. Not wanting to overwhelm her, I did what any girl would do in the midst of someone she admired. I sat awkwardly looking at my notepad. The students had not yet began filing in when Tahir sat in the chair next to mine looking about as awkward as I did. I told her I liked her book and that I was there to report for the school newspaper. Surprisingly enough, she told me that is where she started, as an editor of her school newspaper. She related it almost as if we were equals. Of course we weren’t, she is a successful author of a series, and I just work on the school newspaper, but when she related to me that way, we did not seem too different. I am where she was not too long ago. Tahir told me her humble beginnings, and her past with some of the top news sites in the country, including the Washington Post … It seemed crazy to me that even starting in the “Middle of Nowhere,” Arizona, she was able to find success for her dreams, and it somehow made mine seem more attainable.

We chatted about ourselves, what we do in our free time, and what else but Harry Potter, the one thing people can always relate to, until it was time to begin. I walked to the stage and delivered a short speech as a precursor to her powerpoint. She began with how she got into writing, some she had just told me moments before, some was new. Hearing her speak was almost comfortable. We had spoken just once, but for some reason, I felt like I knew her, like I was a friend hearing the story I have heard a thousand times but still love it just the same. And while we had spoken just once, and she hardly knew me, her voice was familiar, only now she spoke through her real experiences rather than those of her characters. Rather than hearing about Laia or Elias, I was hearing about Sabaa. Same voice. Different words. What got to me most was the extent at which she researched before writing — something I tend to avoid more often than I would like to admit — she did not just sit down and write perfectly. Everything was based off of something real. Even in a fictitious novel, there is so little fiction.

The presentation came to an end, and I had the pleasure of sitting down with her for a one-on-one interview. I asked about her inspirations, her favorite authors, the lay out of her day, and she managed to answer in the exact opposite way I would expect. She drew inspiration not from fantasy novels, but opted for more realistic stories. I was taken aback by this response, but once I considered what I read, it all made sense in a way. I did not feel as if I was reading about some story that could never happen. While the plot was fantastical, there were many aspects of the book that had lively characteristics to them. The characters were real people, not imaginary figures. The conflicts of slavery and rape are present in many countries around the world. It made sense she found inspiration from realistic stories, because it made the story resonate with its readers that much more.

One thing I found in her novels, which broke my heart, was the loss. As everyone knows (or should know at least), when you read a book, the characters become more than just words on a page. They live inside you, and mean the world to you. The pain that comes with a character is often too much to handle. When I spoke with Tahir, I wanted to understand why authors wrote the death of characters. Obviously, those characters come from the hearts of the people who created them, and if I am so attached to them, I can only imagine how the author must feel, so it never really made sense to me why an author would allow such a fate for their characters. Tahir explained it to me as what needed to happen to further the plot and make it more realistic. Life isn’t pretty, and she wanted to get that across and make the story more real by doing what realistically would have happened in that case. She shared her own feelings about one of the characters and really showed that we were on the same page here. And while I understand, I cannot say I am particularly pleased with that reality.

In those two hours, I gained an insight about the books I loved, knowledge of the minds of authors, and met a talented woman who achieved what most can only imagine. Sabaa Tahir grew up in a trailer park, yet went on to UCLA and a successful career after that. It was a success story I had only heard of hypothetically. Meeting someone who achieved what I can only hope for made everything seem more attainable. Tahir gave me the hope I needed, especially when the rest of my life is right in front of me. I saw how she made something out of nothing. How she grew from her trailer park home to her successful journalistic career, and it showed me how the unattainable is only that if you allow it to be.

One Response to “In the embers”