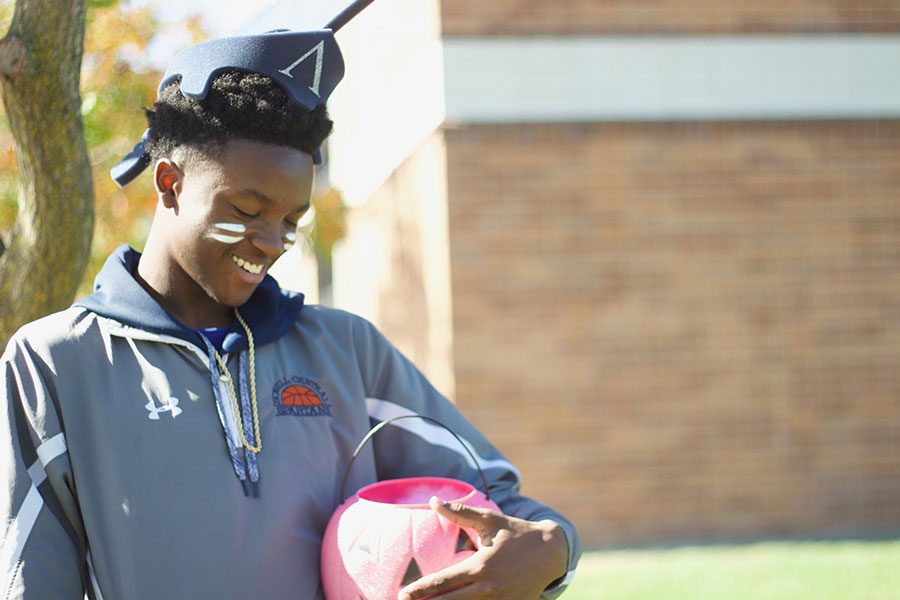 Too old for trick-or-treating?

Students at FHC debate what age we should stop trick-or-treating.

As we all know, Halloween is approaching scarily fast, and there is bound to be plenty of debates about the age restrictions on trick-or-treating. Trick-or-treating is a key part of Halloween, but when are we supposed to stop? Is it still appropriate for high schoolers to participate?

Halloween is known for two main things‒ candy and costumes. Every year, younger kids are able to dress up however they like and walk door to door receiving free treats. Some feel high schoolers should still be allowed to engage in this activity if it is what they seem to enjoy.

Freshmen and sophomores are at the stage in life where they are bridging over from middle school to high school. It can be stressful making this transition, and Halloween can be seen as an excuse to remind themselves they are still kids and should be able to trick-or-treat if they please.

Freshman Olivia Daniel likes to remind herself “age is just a number” and kids are kids, no matter what grade they are in or how far along they are in school.

“It’s Halloween, and we’re kids. We should be able to do what we want,” Daniel said.

She also noted on the fact there is free candy involved, and an opportunity to go around collecting free treats should be available to kids of all ages.

Sophomore Adriel Bunch agrees with Daniel, believing just because we are in high school does not mean we must stop trick-or-treating. The way he views it, taking away our trick-or-treating privileges is equal to depriving us of fun.

“Halloween is fun. It’s so fun to just walk around with your friends and get free candy. I don’t see why we should have to miss out on it,” Bunch said.

When Bunch thinks of Halloween, he thinks of candy. The best way to receive the candy is to trick-or-treat, so high schoolers should not be denied the ability to do so.

Upperclassmen may be approaching the older side, but they are still considered kids until they turn 18. Juniors and seniors may be more experienced when it comes to living the high school life, and they also may be urged to act a little more “mature”. But these students tend to face more stress and challenges than freshmen and sophomores, so it is still nice for them to find some comfort in participating in an activity which takes their mind off of the grown-up life for a night.

Junior Daisy Clark associates school with stress and Halloween with fun. She believes until we are 18, we should not be looked down on for wanting to trick-or-treat.

“For just a couple nights out of the year, it’s nice to feel like a kid and get away from the stress of school. Halloween is one of these nights,” Clark said.

Most high schoolers will agree with Clark when she states school is stressful. Clark takes advantage of nights like Halloween because they allow her to escape the stress for a short while and just enjoy herself.

“In high school, we are at the point where we are expected to grow up. We’re supposed to be becoming more adultlike. But we are still kids, and we should be able to participate if we want to,” Cutshall said.

On the other hand, some believe as high schoolers, trick-or-treating is something we have outgrown. They feel we should leave it for the younger kids and find alternative ways to celebrate Halloween.

The freshmen and sophomores have finally made it to high school and broken out of the little kid stage of their lives. They have waited so long to stop being considered children, and they no longer want to associate themselves with activities that can cause them to still be seen as children.

“We shouldn’t be doing the trick-or-treating. We should be helping the younger kids and watching out for them,” Kolkmeier said.

Sophomore Eric Peasel also encourages his classmates to search for other things to do on Halloween which more appropriately fit our age.

“We’re supposed to be the ones giving the candy out, not taking the candy. Candy is unhealthy, anyway,” Peasel said.

Peasel greatly emphasized his point about candy being unhealthy. He has observed how excited we still get when we think about free candy, and he does not understand why we still get so exhilarated by the familiarly unhealthy treats.

Several juniors and seniors also argue against trick-or-treating. As they slowly approach adulthood, they want to drop as many childlike tendencies as they can, one of those being the beloved Halloween tradition.

Junior Brody Murray sees trick-or-treating as simply childish. He created an analogy comparing Halloween to other festivities such as Christmas and birthdays.

“When you think about it, we don’t get that same feeling on Christmas morning anymore. We used to run downstairs and look for presents under the tree, but now we just sleep until we have to get up,” Murray said.

Now that we are older, things which used to bring us immense amounts of joy no longer have the same effect. Murray thinks we need to realize we are growing up and growing out of certain forms of entertainment.

Senior James Bamberger also views trick-or-treating as something solely for younger kids. Instead of trick-or-treating, Bamberger believes it is more suitable for high schoolers to go out with friends and find other sources of fun while leaving the candy hunting to the little ones.

“If you have gone through puberty and you’re not 12, you’re too old to be trick-or-treating,” Bamberger said.

Students are pretty divided when it comes to the topic of trick-or-treating. This time every year, the arguments about it resurface. Several believe we are too old and it is childish, others feel we are still kids and it is still appropriate for kids our age. So, are high schoolers too old to go trick-or-treating?