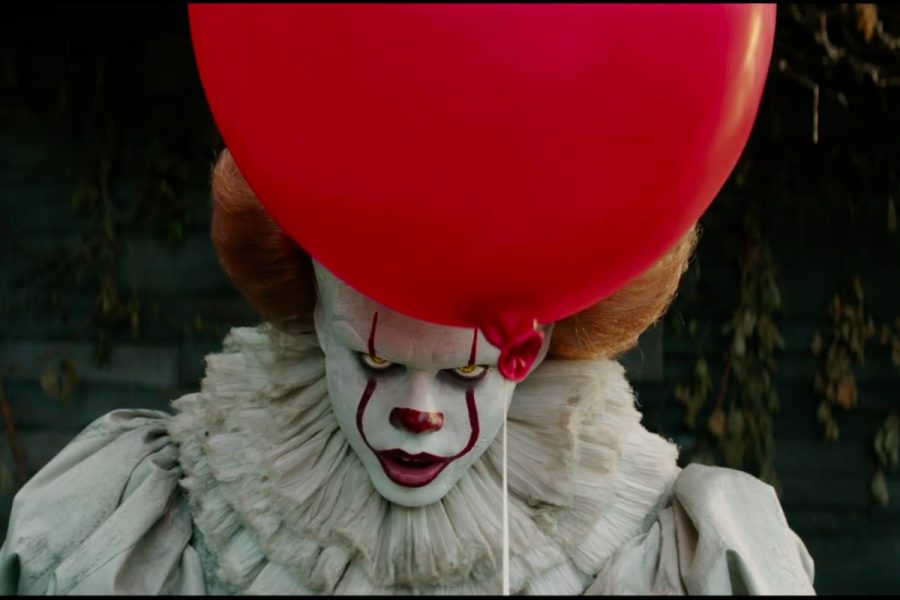 Pennywise the demonic shapeshifter appears from behind his primary foreshadower: a bright red balloon. Pennywise, played by Bill Skarsgård, is now a renowned contemporary horror antagonist for his incredibly unsettling characteristics.

New readaptation of Stephen King’s “IT” is a horrifying title that stands tall, but loses some height to conventionality

In the greater canon of the horror genre, there are few things more viscerally unsettling than Bill Skarsgård’s performance as Pennywise the demonic shapeshifting monster-clown in “IT”, director Andy Muschietti’s 2017 re-adaptation of Stephen King’s legendary 1986 novel. His mere presence is a horror in and of itself – the sharp, alarm-red streaks curling down his face and into a wide malicious grin, his giant, imposing form, the cutting range of inflection and boulder-deep voice – all coalescing into a film antagonist that, while led through some disappointing conventional thrills, leaves a lasting impression as one of the creepiest movie monsters of all time, as well as best performances thereof.

Pennywise returns to stalk the countryside of Derry, Maine every 27 years, a mysterious force that hunts children and drags them into the sewers of the town, leaving it with an abnormally high national disappearance rate that goes seemingly unnoticed by adults. The beautifully cinematographed initial scene, precisely mirroring that of the 1990 two-part miniseries with legendary Tim Curry as the monster, features little Georgie Denbrough (Jackson Robert Scott) chasing a paper boat in the midst of a rainstorm, when it flows into a drain – a drain at which he encounters Pennywise, and does not return. Following Georgie’s disappearance, Pennywise begins again his hunt of the town’s youth, specifically the “Losers Club,” (Finn Wolfhard, Jaeden Lieberher, Jack Dylan Grazer, Wyatt Oleff) a group of bullied kids who, one after another, begin to realize what is going on. More members (Jeremy Ray Taylor, Chosen Jacobs) become part of the band following events of vicious bullying or racial abuse, as well as Beverly Marsh (Sophia Lillis), after observing them.

Muschietti’s take on IT does many things brilliantly – the cinematography especially taking a shining role in the communication of the film’s plot development and overall themes. Camera movement is used with purpose, taking perspective into careful regard when gliding and arcing along with Georgie in the rain, or painstakingly slowly when framing Pennywise at his height. Scenes are framed, not shot, oftentimes with the monster in view but oftentimes not – serving enormously to construct the sense of adult neglect throughout the town. The big-ticket scares leave the camera floundering after creating such suspense, however, but even then it is done intelligently with regard to what we are able to see on the screen. In large 21st century horror films such as this, competent cinematography is a rarity, reminiscent of greater legends of the past, or even “The Descent” (2004).

Foremost of the successes of “IT” are the brilliant performances of the cast – largely composed of teenagers or children, and without a central adult protagonist – a remarkable achievement and another rarity of the genre and of film in general. Though audiences come for the clown himself, Muschietti takes painstaking effort devoting attention to developing each member of the “Losers Club” as an individual character, each with their own backstories, lifestyles, and darker abuses at home or on the streets of Derry. Each truly feels like an individual part of the larger protagonal whole, and through that development the collective camaraderie of the film is made stronger — we grow to love the kids because we love them as they are themselves. Finn Wolfhard of the critically acclaimed Netflix series “Stranger Things” shines in his role as Richie Tozier, his quips causing the audience to break out laughing as much as they are later frozen and unsettled — bringing genuinely funny relief and further juxtaposing childhood innocence and violence.

“IT” is not a film that ranks among the classic legends of its genre, but it is the best film adaptation of Stephen King’s wonderfully elegant prose since “Carrie” (1976) and “The Shining” (1980). The film, as may seem obvious, is not entirely about a monstrous clown, but the far more monstrous demons of childhood abuse, neglect, and the capacity for violence to go unnoticed. This far more terrifying theme is tackled by Muschietti, especially in his incredibly disturbing portrayal of the violence caused by bullies, as well as physical and sexual abuse in the home, but his efforts flounder when the shocked silence of horror becomes overpowered by the omnipresent desire to exhibit flashy CGI scares. The digitalization doesn’t lead to inherently bad horror, but the conventional kind that jumps the viewer, and inevitably leaves it resting on the shelf in time. Muschietti would have done better to realize that King’s horror is best experienced when left to imagination. As such, “IT” is a highly disturbing, well-cinematographed adaptation with commendable performances and hilarious comedic juxtaposition, but is better experienced on the page — where the real themes can be felt as they are, not constructed, or left behind in favor of the real demon of cinema horror: conventionality. Regardless, there has not been a horror like Pennywise, or the deeper terrors with him, in years.