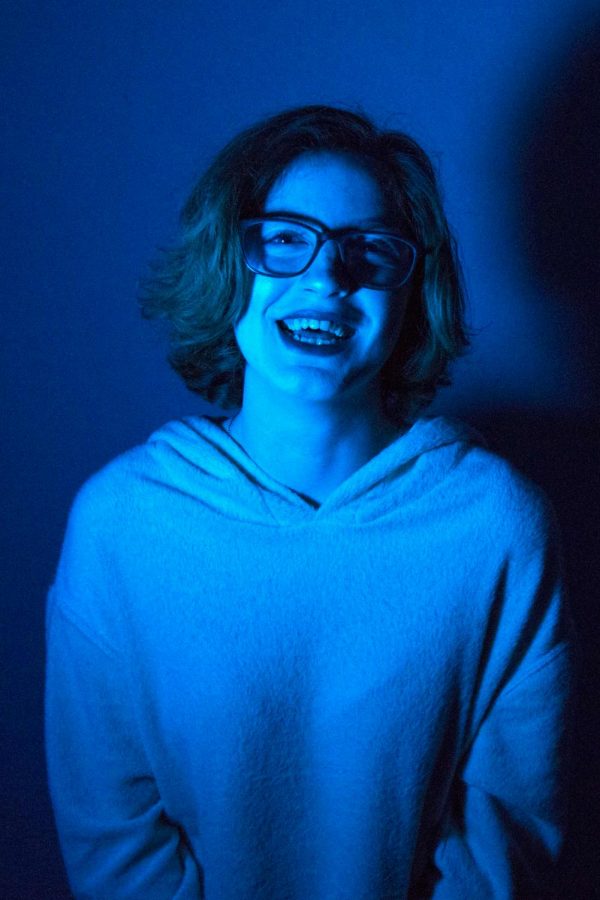 “All those cliche sayings and posters

The room, however, was familiar; this was not her first stay in a psychiatric hospital. Her stepmother sat next to her on her bed — nothing more than a wood cot — at DePaul Hospital, where English had been staying, holding back tears as she spoke to the girl she loved as her own daughter, the girl she was scared of losing.

As they talked, she told English she was sorry the family wasn’t more understanding of what she was going through.

She told English she couldn’t stand losing another daughter.

She told English she owed it to no one except herself to keep going; it was up to her to keep taking her meds, to keep fighting, to be responsible for her own recovery.

In that room, on the anniversary of her best friend’s death, English made a decision: she was not going to let her mental health issues consume her any longer. She was going to keep fighting. She was done with the stays in psychiatric hospitals, done getting her stomach pumped, done attempting suicide. After eleven years, she was done.

English’s road of struggling was a long and arduous one, beginning as young as seven years old as she bounced between foster homes, worsening with the loss of her close friend and sister, and continuing through now, her senior year, when she finally began her recovery.

“I, up until recently, have been suicidal almost every single day of my life,” she said. “And that doesn’t mean I try to kill myself every day; it’s more suicidal idealization, which means that you’d be okay if your life ended for any reason, if it was by you or by anyone else — anything. It was more just every single day I didn’t want to get up, every time I went to bed I hoped I wouldn’t wake up, I hoped I would get hit by a car.”

English was first diagnosed with bipolar psychosis disorder, manic depression, severe anxiety disorder and anorexia nervosa at age 10, but she had already been struggling with suicidal thoughts for years without knowing what they were.

“It’s actually kind of a sad thing,” she said. “I was about seven… I didn’t realize what I was doing because I didn’t know what it was called or anything like that, [but]… I didn’t always want to be there and it wasn’t just the place, it was in general.”

Teegan Winkeler, senior, is no stranger to this feeling. Having dealt with depression, anxiety and OCD since elementary school, she has also experienced persistent suicidal thoughts for years.

This shared mentality lead to both Winkeler and English spending time in psychiatric hospitals. Although they were not free physically, these stays offered time for reflection, specifically on the people surrounding them. English was visited by her father and stepmother whenever possible while others called her stays grabs for attention or believed they made her more trouble than she was worth, which, while it served as a reminder for her that not everyone was supportive, lead her to realize there were people in her corner no matter what. According to Winkeler, these people can offer additional support.

Heather Borah, family support advisor for CHADs coalition, a group that attempts to raise awareness about suicide and depression in teenagers, agrees that a good way to help out someone who might be struggling is simply by being that friend and lending a kind ear – considering, of course, that the person also finds help in a professional therapist.

“I think [those around someone with a mental illness] can listen, they can listen and be supportive without making a judgement, without telling that person what they should or shouldn’t be doing. They can validate that this is a rough time and what they’re going through is rough,” Mrs. Borah said. “I think a lot of times, adults are not great at validating teenagers… but just validating that it’s okay to feel whatever they’re feeling, that it’s safe to feel that, safe to share that, that’s the best you [as an adult] can do.”

After struggling for years, Winkeler and English have both improved, but neither feel as though they’ve been cured or have gotten over their mental illnesses; both still have bad days, both still struggle sometimes. The difference, though, is that they now know what to do to continue progressing in their respective recoveries instead of reverting back to suicidality.

“Obviously I’m not ever going to truly get over my issues because that’s not how they work, but by continuing to go to therapy, by continuing to take the medicine I was prescribed, and just working to get better, [I can improve],” Winkeler said. “It’s a lot of work, but [it’s worth it].”

Mrs. Borah believes continued improvement relies on continuous effort: going to therapy, taking prescribed medications, doing what is recommended by psychiatrists and therapists. This, she believes, is the best way to remain on the path to recovery.

“If [a person] is on that journey [to recovery] already, [I would suggest] to make sure that they’re following through with their appointments, that if they’re taking medication to be taking it regularly, [to make sure they’re] following those instructions from the doctor about medications and reaching out for additional support if they need it, especially if they’re starting to have thoughts of suicide,” Mrs. Borah said.

Following this advice has not always been easy for English in the past, leading to her most recent hospitalization, but she has since discovered a desire to keep striving for more out of her life, which motivates her to keep going even when she begins to fall back into old bad habits and mentalities.

“Every now and then, I feel like I’m slipping back, like I’m not doing enough, I’m not good enough, but then I have to remind myself that that isn’t true,” she said. “It’s very rocky, the process, and it’s always gonna be rocky until things level out. I don’t think that I’m never gonna feel suicidal again, but I don’t want to end things, I don’t want to, I want to keep trying, I want to do something with my life.”

“It’s very rocky, the process, and it’s always gonna be rocky until things level out. I don’t think that I’m never gonna feel suicidal again, but I don’t want to end things, I don’t want to, I want to keep trying, I want to do something with my life.””

English believes this improvement is possible, no matter how bleak the situation; after all, she did it. Before being admitted into DePaul that last time, she didn’t think it would be possible to get better, but she is still here to tell her story, still here to follow her dreams to teach kindergarten, still here to dance and write and laugh and cry and live. As someone who knows firsthand how difficult getting help can be, she encourages anyone who may be struggling to get help and reminds them, just as she’s reminded herself time and time again, “How can you see the sunshine if you’re always looking at the dirt?”

“Sometimes people are ashamed to get help because they don’t want to admit [they need it],” she said. “But all those cliche sayings and posters, you don’t realize that they’re true until after your recovery starts, but they are. You have to admit it, you have to find some sort of help, and you have to want it. You can’t just say, ‘Oh, I want it,’ but not work towards it. And if you think that there aren’t people who are gonna miss you, you’re an idiot. Sometimes the best advice [is] blunt and kind of hurtful, but sugarcoating things for people who are suicidal isn’t gonna do anything. It’s not… If things weren’t meant to get better, then you would never have been here in the first place.”