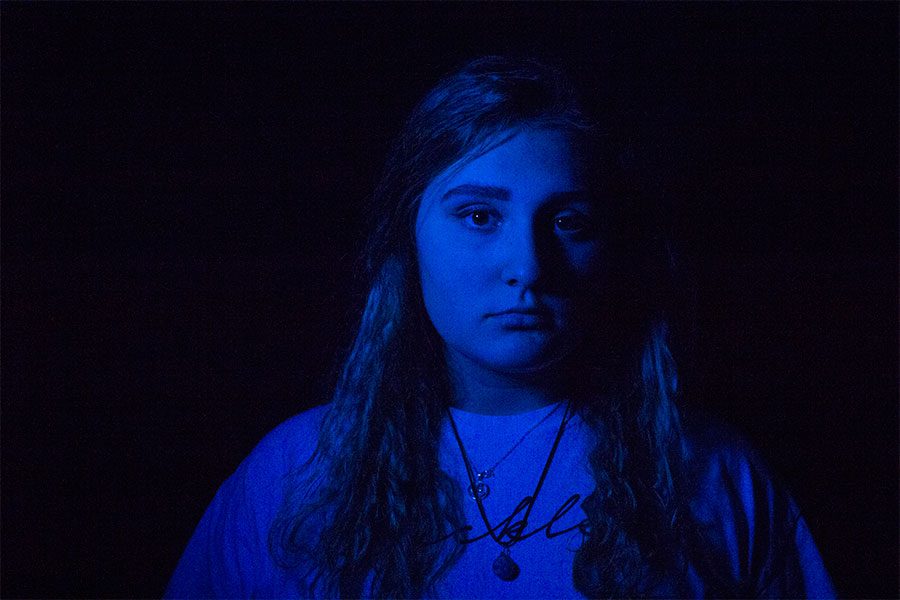 Whitney Klein shares her battle to find herself

My eyes are open, but I can’t see anything. My hands are laying flat on something, I can’t place the feeling. I can’t place any feeling. I can’t move. Water hits my feet. It’s rushing over me. Faster, it’s bringing me under. My legs have gone under, my body, my head sinks under. I try to hold onto my breath as long as I can. The water is dragging me down into its black depths. Why can’t I move? Why can’t I save myself? I’ve gone down so far now. The only light I can see is the small dot of a moon above the surface. I want to scream for help. I want to try to save myself, but I can’t.

My struggle with mental illness has been a long fight. From realizing my actions and feelings were unusual, to researching different illnesses, to tracking it back to things in my life that it could be a direct result from, exact events and influences and medical issues, I’ve fought to understand why I am the way I am. I’ve figured out and changed so much, but the journey to where I am today was not easy.

This is going to make me sound like the narrator of some edgy indie movie, but I had a rough childhood, and the effects of that are long lasting. I’ve either learned to live with or forgotten most of it. I would get yelled at for doing almost anything. The constant screaming voice that followed me everywhere I went left me with habits that I can’t explain, at least not without telling my whole life story. My best example is going out to eat. I used to get yelled at for not ordering fast enough, or that I was ordering something too expensive, then when my food arrived, I’d hear comments about how much I was eating or how I was eating; the criticism never stopped. I can’t simply go out to eat with friends now. I can’t talk to the servers by myself, I can’t eat in front of people I’m not comfortable with.

This is the point when my therapist would say one of two things: “You can’t or you won’t?” or “What’s stopping you?” I’m stopping me. I stop myself because I don’t want to be yelled at or ridiculed for something which I’m supposed to enjoy. I stop myself because I’ve been conditioned to believe that I’m doing something wrong. I hear them yelling from the back of my mind, and it’s too much.

Not only was it the yelling that made me feel inferior, but no matter what I did, I was never good enough to impress my father. I am the fourth out of five children. Stuck in the middle. I never had a talent or one thing that made me special like my siblings did. I felt like everything I did just disappointed my dad. Honestly, his disappointment forced me to take care of myself. When I was in middle school, I was on Epilepsy medication which messed up my metabolism and caused me to gain a lot of weight. I would try to lose the weight to make my dad happy. I tried to be the perfect, in shape, athletic kid that he wanted, but at some point, I realized I would never be perfect enough. I let go. I fell into a depression and the urge to impress my dad turned into a deep hatred. I hated him, but the hatred turned towards myself. I regretted that I hated him because he soon was hospitalized for a terminal disease.

I grew to hate myself at only 12 years old. An age where I should be out enjoying myself. I spent most of my time by myself locked away in my room reading because it was an escape to anywhere else.

It might not sound like a lot to you, but the yelling and the criticism is just the tip of the iceberg. I dealt with more than yelling, but most of it, I refuse to talk about, even to my therapist. These things flipped a switch inside me at a young age. I never could be fully happy or be myself from then.

The summer after 8th grade my parents decided we were moving. I had to switch school districts. I never got to say goodbye to my old friends. I was in a new school where I knew no one, terrified to go in alone, but then I met a whole group of friends who invited me in. I thought they were going to be the best thing, but it turns out they were the worst. They spent years backstabbing me, cheating, manipulating and hurting me in every way possible, but acting like they were innocent. It took 3 years to get away from them. I lost my ability to trust people, I stopped believing that people could be genuinely nice. I built up walls and locked myself inside of them.

Come December, something happened. Scott, one of the few friends I’d had since freshman year who had never done anything to hurt me, was gone. I went to my friends who were supposed to be there for me; they ignored me and acted as if I had no right to be upset. That event showed me that none of the people who called themselves my friends actually cared about me. I got rid of everyone. My eyes were finally open to the pain they were causing me.

As I previously stated, I dropped everyone who was causing me damage. It was painful, but it was necessary. I started going to therapy, and opening up about everything. I started taking care of myself. I saw actual worth in myself. I still deal with panic attacks and I still have my anxiety, and those days when I can’t get out of bed, but I’ve seen that my better days are outnumbering the bad ones. The people in my life show me they care. I’ve learned to live with the things I used to let drag me down. I’ll always have my bad days and I’ll always have my mental illnesses, but I’m not letting them control me.

And now, I can help other people the way that I helped myself by noticing the signs and letting them know there’s someone here to help. Everyone should do this. Mental illness shouldn’t be ridiculed. People have no say in what happens to them or what ailments they have. People should recognize their pain, people should reach out, people need to make a change. The only way to spread happiness in the world is to show it that you care.