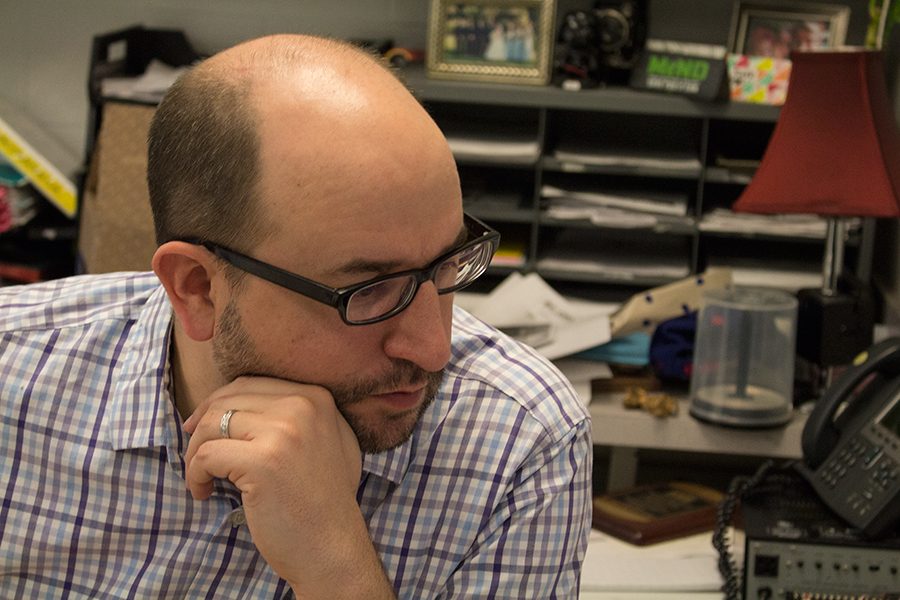 So here you go: the teacher appreciation that’s been in the works since freshman year.

When I met Schott, I was terrified. Not of him, necessarily – at least, not only of him. I was scared of everything freshman year, so I sat at a table in his room and I did my work quietly, writing the few stories he required of us. He saw something, though, in the way I wrote. I didn’t think I was anything special. English was always my best class, yes, and I had known I was going to join newspaper even back then, but I was doing it as just another outlet to do what I loved: write. I don’t think I ever thought I had a real skill in writing until Schott asked to run one of my stories in the paper and on the website. Since then, I’ve been published in the newspaper countless times – well, probably not countless, but I’m an English kid, what do you expect? – but that was the first. And that was the first time I really truly believed I was good at something or that I could succeed in something. I remember going home soon after and telling my dad I wanted to be a journalist, and now, four years later, I’m headed to the journalism school at Mizzou. If it hadn’t been for Schott, none of this ever would have happened. He’s the one who set this part of my life in motion.

But all of that’s pretty big picture; what makes Schott such a significant teacher is what he does to help us on a daily basis.

I’ve been in room 139 for what will be three and a half years, and through the innumerable hours I have spent in here, I’ve learned a few things about the bald man who sits at the desk in the corner.

First things first, he knows what he’s looking for, and what you’ve done is probably not it. Schott will always be the first to tell you, “I don’t like that,” or, my personal favorite, “that’s not really doing anything for me,” which loosely translates to mean, “you did something fine, it’s just not outstanding, and I know you can do better.” This, of course, is always a precursor to a lot of complaining by my fellow editor-in-chief and me as we take one last look at the design we’ve been working on for hours before tearing it apart to make something better. But that’s just the thing: every time Schott tells us he’s “not really feeling” something, it gets better, because he’s right; it wasn’t good enough the first time or the second time or the tenth time. But eventually, we get it right – or a lot closer to right than what it was originally. Without him pushing me to strive for more, to do better, I would never have gotten to where I am today. He could have let me stick with my first tries, the things I did that were decent, but then I never would have improved. As annoying as it is, he pushed me to never settle for what’s decent; he taught me to go beyond what’s easy, what’s average, because that doesn’t get anyone anywhere.

Despite this, though, Schott is one of those teachers who will wholeheartedly believe in students and will tell them just that. Joining a publications class is daunting; you kind of just get thrown into the midst of everything and told “okay, now make a newspaper” – especially when I joined sophomore year, when most of the staff was returning. It would’ve been easy to quit if I hadn’t thought what I was doing was good – and I never would’ve thought what I was doing was good if Schott hadn’t been in my corner the whole time. It’s easy for a lot of students to slip under the radar in other classes, and it’s easy to get discouraged because of this because you feel like you’re not getting recognized for the quality of your work or how hard you’re trying. He will always push you to get better, yes, but once you’re where he thinks you should be, he will be sure to let you know. Schott has never made me feel forgotten or overlooked like so many other teachers have.

It feels ironic doing a teacher appreciation about Schott because he has told us so many times that he’s not a teacher, he’s an advisor. Although we joke about this, it is true; Schott isn’t just a teacher. He does more than any other teacher does. His class has prepared me more for life than any other one, and not just because I’m pursuing journalism. He gives us opportunities we could never have dreamed of, like covering a Trump speech or sending me to Washington DC for a conference, and teaches us more real world skills than a typical sit-in-a-room-and-stare-at-the-board class. I’ve learned how to talk to people, how to work with people, how to work for what I want. We all work our butts off for whichever publication we’re a part of, but Schott works his butt off for all of them, doing everything he can to make them the best they can possibly be. Without him, the newspaper, the yearbook, the website, none of them would be what they are. More so than that, though, he does something few other teachers do: he makes his room a home for the students who are in it. 139 is a home base for a lot of us; it’s where we go before and after school, where we eat lunch, where we go when we’re upset or celebrating or just need a second to breathe. It’s literally a home away from home for many of us; this is the room where I feel most comfortable. If you’re ever looking for me, I’m most likely in here. It’s where I’ve had breakdowns and breakthroughs, moments of celebration and moments of disappointment, hours upon hours spent working diligently on this paper and website. There’s a reason we call Schott “school dad;” he’s everything you’d expect from a dad. He’s supportive, he’s joking, and he’s always there for you. He’s one of very few teachers who I’d go to if I had a problem because I know he’d listen to me and talk to me about it, or even just offer up his backroom for us to take refuge in.

I’ve been in this room for three and a half years. This room, room 139, has become my safe space, my home, my place. This newspaper has become my passion, my lifeblood, my life. And none of it would be what it is without the bald man sitting at his desk in the corner through everything, all the good and the bad moments. Our publications department would be nowhere close to what it is today without Schott. I would be nowhere close to who I am today without Schott. I have him to thank for a fantastic three and a half years and a bright future.

There you go, Schott. There’s the teacher appreciation three years in the making.