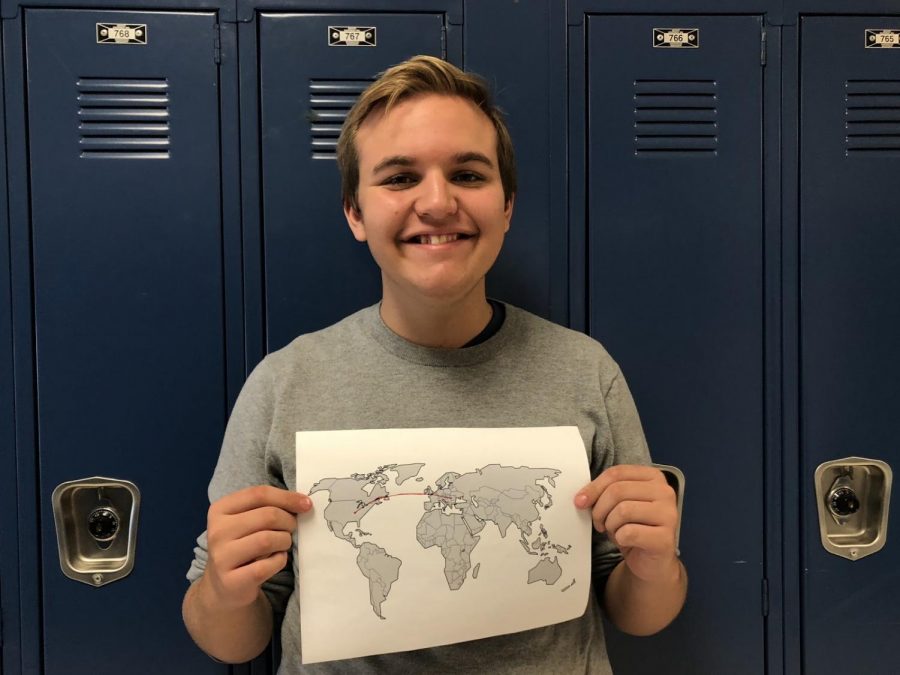 Pordea holds up an image showing the distance between his current home and where his family immigrated from.

The impactful effect moving to a new country has on students

Growing up in the country or state you were born in is a privilege that many of us don’t ever think about or fully appreciate- familiar streets, customs, and people are a comfort that not all kids or students have.

The process of leaving one’s home for a place completely unlike what they are used to is an experience that isn’t brought to light very often, but has a profound impact on the individuals- and more specifically, kids, that go through it.

Junior Bobby Pordea moved from Romania to the United States in 2012, and he recalls the experience of moving to America as hectic and complicated.

“There was definitely sort of a responsibility shock, and then the culture shock because [it’s] very, very different here,” Pordea said. The transition of cultures and customs along with the process of moving can be extremely exhausting, and has the potential to impact a teenager for the rest of their lives.

When Pordea moved, he was required to leave his dog behind — along with many of his belongings — as the price to ship and relocate a large amount of cargo overseas adds up quick.

Nonetheless, Pordea feels as if the decision to move was overall worth it. Every family is different, and when it comes to the reasons for relocating, there are a wide range of possibilities. May it be opportunity, financial stability, or simply a change of scenery, the only thing that truly stays constant is family.

Sophomore Israel Chavez’s parents moved from Mexico over 10 years ago in order to obtain better healthcare and doctors for their children.  They bounced around from state to state until settling on Missouri after finding a hospital they felt worked with their needs. He feels that moving to America brought his family closer together.

“Some of my other relatives have moved over here, too… so now we have a bigger family” Chavez said. The unity and security that the states provided the Chavez family with the stability they needed to grow and flourish as a family.

Despite this, the hardships that many immigrants have to go through in order to live and sustain themselves in America are more pressing and binding than ever, and can easily result in strain on families and individuals alike.

For junior Isabella Lupescu, the struggle to gain citizenship and green cards for her parents was ongoing for over 15 years. Her family faced discrimination and anti-semitism as they fought to stay afloat in their new home, but persevered in hopes of a better and more secure life for their family.

The decision to move out of Israel and to America for the Lupescu family was not a walk in the park. While Isabella’s mother was pregnant with her, Lupescu’s father was on the bus on his way to work one morning when the bus next to him was suddenly blown up by a suicide bomber.
“And that’s just a normal occurrence. But my dad happened to be super close to it, and that was kind of the final straw… We were this close to not having a dad.” Lupescu stated. This traumatic event combined with the terrorism and constant fear of violence within Israel drove the Lupescu family to seek refuge and safer living conditions in order to start their family.

Although leaving Israel was a safe decision, Lupescu feels as if moving to America pushed her family further apart.

“It was just really difficult coming to America for them, and trying to get our life together with so little money. And finding jobs as immigrants is crazy difficult.” Lupescu stated. The struggles her family dealt with after moving to America seemed almost worse than the threat of terrorism back in Islam, and although her family found stability, the effects of the difficult transition are long-lasting and deleterious to this day.

The experience of moving overseas is unique for every individual that goes through it. Such a large shift in lifestyle can be hard on many, especially at a young age.