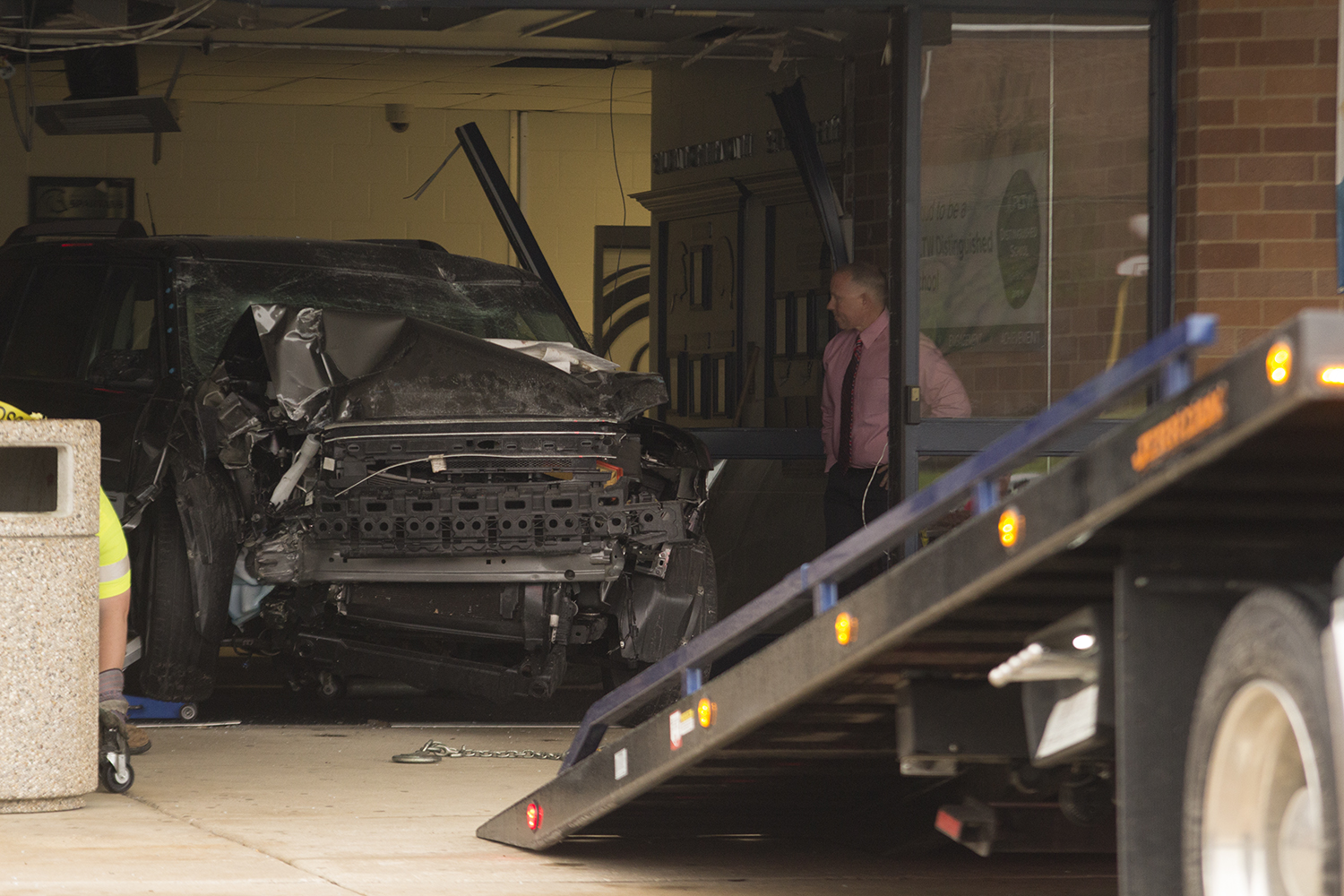 The perpetrator’s car is removed away from the site of entry as Dr. Sonny Arnel watches on. The accident occurred at 3:45 a.m. and authorities were notified of the accident shortly afterwards. (Lanie Sanders)

The perpetrator’s car is removed away from the site of entry as Dr. Sonny Arnel watches on. The accident occurred at 3:45 a.m. and authorities were notified of the accident shortly afterwards.

The jarring reason why school was canceled earlier this morning 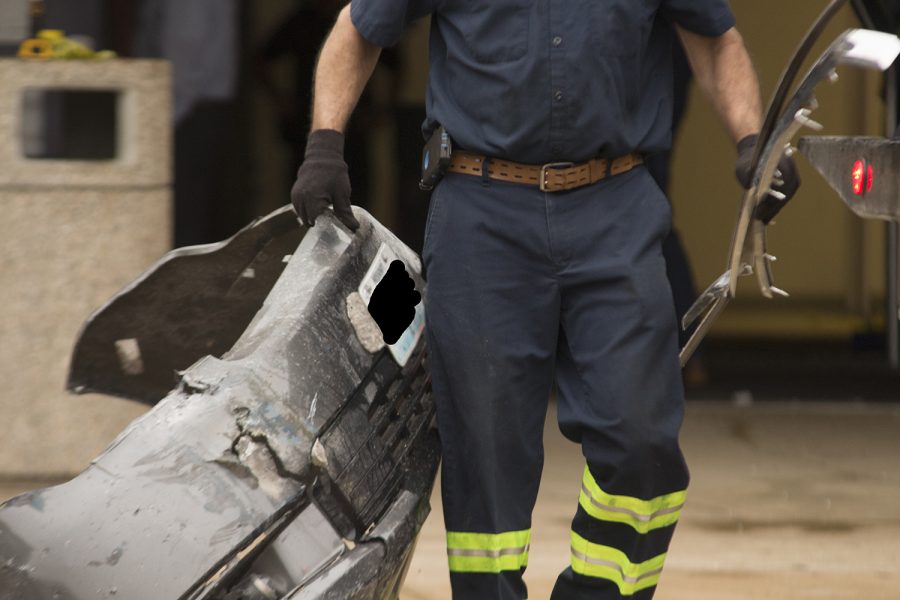 As the bells are still ringing for students to get to class, the halls of Francis Howell Central are empty. School was cancelled at 5:30 a.m due to an accident at the front entrance of the school that took place at 3:45 a.m. The Cottleville Police Department has not released information about the suspect, who was picked up in Cottleville after leaving the scene of the crime, according to FHSD Director of Communications, Matt Deichmann. The extent of the injuries of the driver are unclear, according to Mr. Deichmann.

“They weren’t too severe because the individual was able to leave on foot,” Mr Deichmann said. 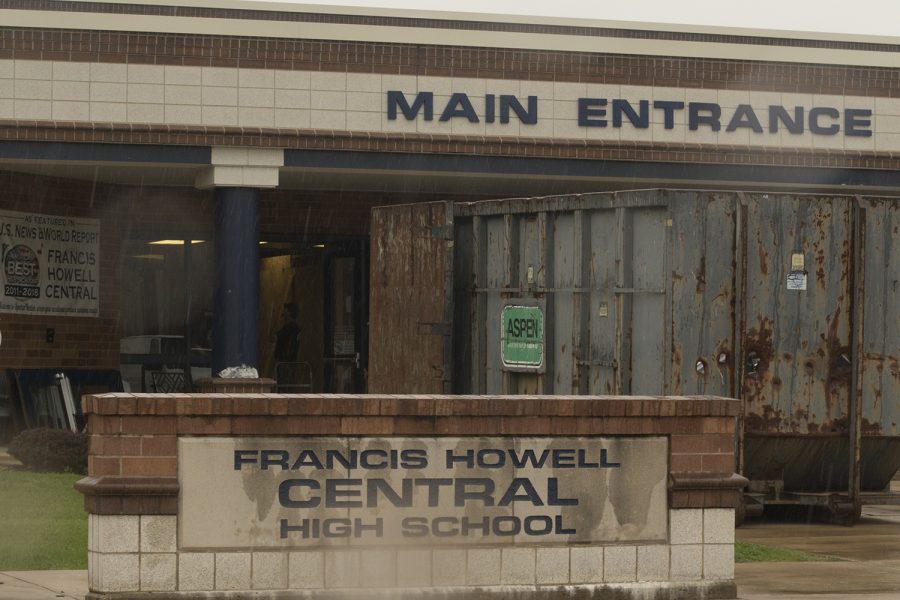 Caused by a student driving a car through the main entrance, the damage includes four smashed doors, ripped out ceiling tiles, and damage to the door frame, along with the electricity in that part of the building. The hood of the car ended up facing toward the east wing because it bounced backwards after nicking the cinder blocks on the right side of the hallway. The Francis Howell School District is still investigating whether or not the building sustained any structural damage. Mr. Deichmann, was able to share some information regarding the known damage and a possible solution.

“The safety vestibule was damaged, and there was a lot of glass and metal,” Mr. Deichmann said. “There is a scenario where perhaps we board up [the main] entrance and use an alternative entrance tomorrow.”

For the removal of the car, the Fire Department was called to ensure the safety of all present, and a tow truck escorted the vehicle off campus.

This was an important week for Francis Howell Central, with the Junior ACT scheduled for this morning. It will be difficult to reschedule with this Friday being graduation practice for Seniors, and the college fair for Juniors, occupying both the large and small gym. Since the district has already paid for an ACT for every Junior and for the training of test proctors, the test will have to be rescheduled.

“Mr. Warner is our contact with that and we met with them on the phone this morning. We can’t find a date the rest of this year to test,” Dr. Sonny Arnel said. “We’re looking to test our juniors, which will be seniors next year in the fall. Students that need that score sooner for college entrance will be able to pick up a voucher.”

The car, a silver Ford Flex, was found this morning still in the attendance hallway which is located inside the main entrance of the building. As for its damage, the grill and front bumper were falling off and the engine leaked copious amounts of oil which coated the hallway. Principal Sonny Arnel voiced his concerns about the spread of fake news.

“I hate how people will make their own story up. People will imagine or begin to fabricate stuff or add details that are not accurate,” Dr. Arnel said. “It distracts all the great things that happen here.”

At 6 a.m. the press arrived with representatives from channels 2,5, and 11. In terms of covering the story, field reporter Katherine Hessel spoke about how although this story isn’t earth shattering, it’s unique.

“In the mornings, a lot of things happen,” Hessel said. “We do see a lot of cars in buildings, [sometimes] called a smash and grab. In this case we don’t know what the reason is, but I have never seen a car in a school like this.”

UPDATED 5/10: After the temporary wall was finished, students from Mrs. Switzers’ painting class went down and made the placeholder into a work of art. And even though the walls are more visually appealing than they were, students and teachers alike have been wondering when the doors will be fixed and back to normal.

“It takes about three months to be fabricated, so unfortunately we will come back to school with the same entrance issues as we have now,” Dr. Arnel said.

Until then, students and visitors will still have to check in at the temporary entrance, which is located at the doors by the auditorium. 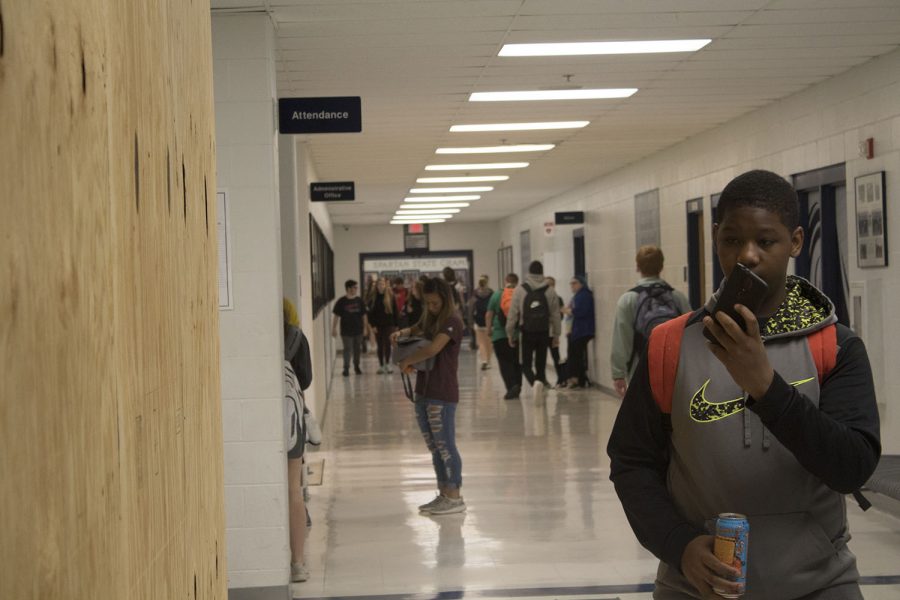 A student walking past takes a picture of the plywood box blocking off the damage. The damage is extensive and will not be completely fixed until the end of July, it is estimated.

Today, students walked along hallways that were not 24 hours ago coated in oil. They chatted and whispered and laughed about their day off in the same place a ravaged SUV had sat the previous morning. Where there had previously been crushed metal, glass, and stone, a plywood box now hid the evidence of an unprecedented incident that literally shook the Francis Howell Central building and the people inside. Sophomore Savannah Carbutt was one of those people and remembers her thoughts and emotions upon hearing of what took place in the early hours of April 24.
“I felt a little stressed out at first and it kind of felt surreal because nothing has ever happened to the school, at least in my experience, like this before,” Carbutt said. “Everybody has been having their own conversations and everybody knows what happened.”

The whispers throughout the school began long before the beginning of school this morning. Junior Nicolas Moore says he has heard many things amongst the students, but that the most reliable sources were FHCToday.com and other news stations.

“I heard [about it] from friends, from social media, and from FHCToday.com,” Moore said. “[The most helpful and informative was] probably the FHCToday article because it came from an actual source that was from a person that was here.”

Throughout the day, the functions of FHC were still able to be performed and the school day, according to Principal Sonny Arnel.

“Because it’s isolated there, the damage really is less than it could have been. As a result, we were able to run all of our functions last night and we didn’t miss any games,” Dr. Arnel said.

While after-school activities were still able to commence, and most students were able to make it in school without issue, the doorway that was destroyed was the normal entrance for students with special needs. However, a solution was worked out and the obstacle was overcome.

The longest thing will be the doors. Those are all custom, made to fit. It’s not like you can buy it at Home Depot.”

“We had a couple kids that are our special needs students and their entrance was obstructed, [so] their drop off [was] a little bit of a change, [which is] for them sometimes difficult,” Dr. Arnel said. “We [worked] with them to make sure they’re comfortable and feel safe and secure.”

Yesterday, the school’s insurance came in and was able to begin estimating damage costs, and the long process to fix the carnage began. Dr. Arnel says that the first and longest step will be to get new doors at the entrance of the building.

“The longest thing will be the doors,” Dr. Arnel said. “Those are all custom, made to fit. It’s not like you can buy it at Home Depot.”

As construction will be extensive, it is not set to start until over the summer when students are out of class. Dr. Arnel has communicated that the accident site must be ready before July 25th, the day of schedule pick-up, and he hopes it will be finished the week before.

“The construction part of it won’t start until school’s out because it’s pretty major, you know, so it won’t begin until at least after May 22,” Dr. Arnel said. “I said I need to have everything…floor, walls…ceiling, all that complete by our schedule pickup which is July 25 and 26th. So…hopefully a week before that.”

The school’s ability to stay functioning was partly due to the administrative staff’s flexibility throughout the ordeal, a trait that impressed Moore and Carbutt.

“[The administrators have performed] very well,” Moore said. “The way that they were able to come up with the block and switch the security just to have school day was a job well done.”

“They definitely don’t seem stressed, but I would be in their situation,” Carbutt said. “I think they handled it pretty well. Getting it all cleaned up in one day and having us back here today, the day after it actually happened, I think that’s pretty cool honestly.”

Because of the missed day of school, FHC has had to appeal to the Missouri Department of Elementary and Secondary Education to be pardoned of the day. Dr. Arnel has hope for FHC’s case, as the school has had two incidents in the past that have been pardoned.

“We’ve had two other other times we’ve requested to be forgiven for a day for someone specific school incident and both times the state has let that happen and agreed on that,” Dr. Arnel said. “Hopefully we’ll know soon. I know all of us are wanting to know that, so I would anticipate that hopefully, we will know by sometime next week to know the answer to that so I can share it out.”

Unfortunately, this was no everyday school day that was missed; the free ACT for juniors was scheduled to occur yesterday. A solution has been decided on by Assistant Principal Brian Warner.

Unfortunately, there are no other options for juniors who missed out on the opportunity on Wednesday. Some juniors, like Moore, are concerned that this will impede some of those who need their scores before the July test date.

“Some people needed their scores like as soon as they could to know if they have to take it again for their college,” Moore said.

In the aftermath of this incident, Dr. Arnel expresses how fortunate it is that no one was hurt, and how FHC should come together in a show of the true goodness of the school despite the accident.