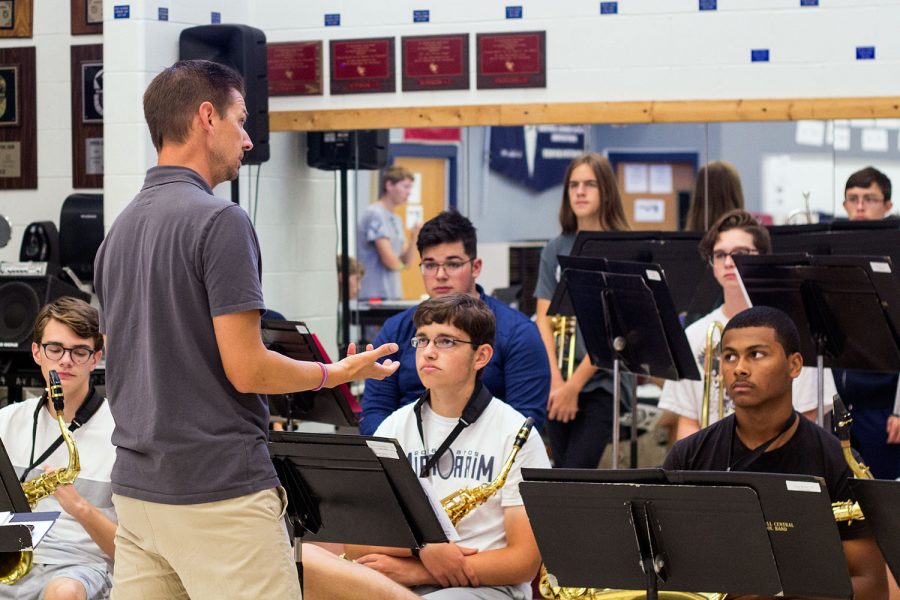 Mr. Nathan Griffin speaks with members of one of the school bands. The Jazz Band is in search of a bass player to round out its sound.

Missing a piece to their musical puzzle

Jazz band continues to search for a bass player

Walking through the hallways, one can hear the glorious sounds of instruments harmonizing in the echoing of the school, carrying mesmerizing tunes from classroom to classroom. It transforms the somewhat quiet school environment into an array of beautiful vibrations that please the ears of everyone lucky enough to hear them. Jazz band plays such a big part in this school, not only by gracing the school with their high skill level and beautiful technique but also setting positive examples in which they come together as one and work through any challenges present throughout their musical enterprise.

Each and every instrument plays such an important role in the ability of the entire band to produce the sublime music they assemble day after day. Without each and every one of these crucial instruments present, the band cannot work as efficiently. The entire jazz band is like one musical puzzle. Without all of its pieces, it is not fully complete. Unfortunately, the band is currently missing a piece to their puzzle, the bass. They have been searching for this missing piece and cannot seem to find it.

Although jazz band is on the search for a new bass player in time for their concert, with the extraordinary efforts of band teacher, Nathan Griffin, and the drive of the players, they continue to excel as a whole. Every instrument in the jazz band plays a vital role in the harmony of the group. With a bass player missing, the other instruments have to work hard to make up for that loss. Other instrument players have made it clear they are doing whatever they can to make up for the loss. Talking to junior piano player David Bonstead and sophomore guitar player, Harrison Smith made clear the pure dedication each and every one of the students has to jazz band. They continue to persevere through a missing instrument by learning new ways to make up for what they are missing from that instrument.

“We’re making many changes to compensate for the loss,” Bonstead said.

“We just make it work in other ways,” Griffin said.

Although the instruments can make up for the loss with extra work, the bass plays an important role for every instrument in the band. It helps keep time and helps all of the instruments to play on tempo. Without this key component, the students have a more difficult time playing to the best of their ability.

This is the first year that the Jazz band has not had someone to step up and play the instrument.

“It has never been an issue like [we have seen] this year… as a whole, we’ve seen [this instrument] continue to decrease [in available players],” Griffin said.

When faced with the challenge of not having a player for instruments in the past, other students have offered to step up and play.

“That’s the cool part about our band program and the school in general. Everybody just steps up to the challenge… somebody will fill it which is why I’ve never really been worried about it,” Griffin said.

Although they are in need of a new bass player, the jazz band is not rushing the process because they need to find someone who is able to function proficiently behind the instrument. Griffin made it clear the new bass player has to be able to play the instrument effectively so the musician and the rest of the band are on the same pace and not overwhelmed by the heavy workload.

“The thing I need in a bass player is somebody who can function behind it, meaning they have to be able to play the strings of the instrument…. from there I can teach them the rest of the styles,”  Griffin said.

One thing that is clear throughout the stress of missing a vital player in his band is that Griffin and his students continue to work around the issue with a positive mindset, and will continue to succeed with or without a bass player.