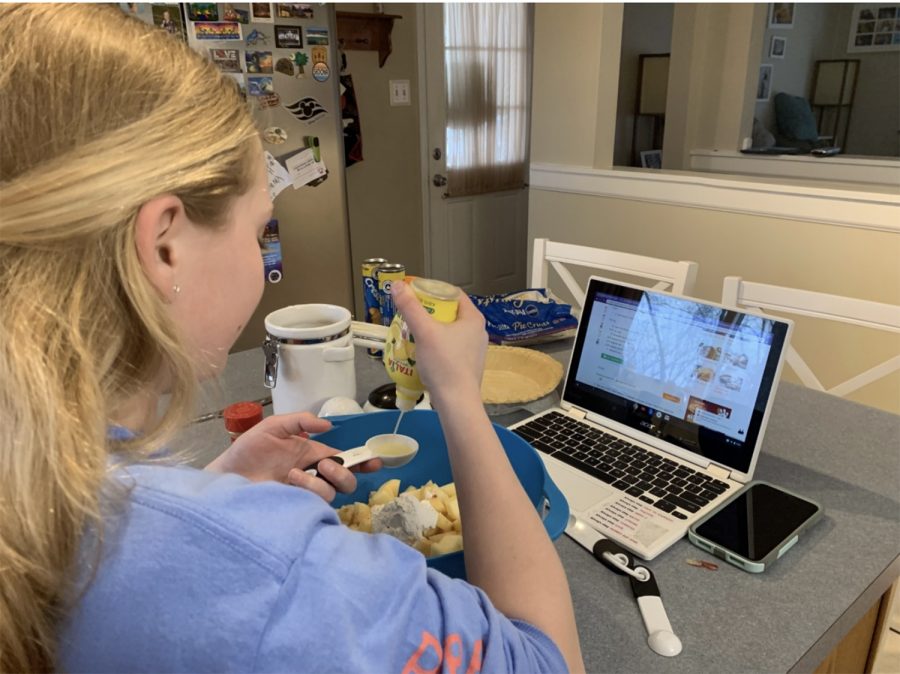 Emma Eiswirth puts the finishing touches on her lunchtime cheese quesadilla while also vlogging about it.

Days In The Life: Ashley Eiswirth

Anyone who knows me knows that I keep busy. From the time I was old enough to work, I’ve held multiple jobs at the same time. In addition to teaching at FHC, I teach night school twice per week at Goodwill Excel Center located in downtown STL. I rely on work and routine to keep me emotionally healthy. I have really been struggling with all of the downtime we’ve had this past week. It’s been difficult to get up and get motivated. I think of all the things I need to do. When I try to begin them, I find myself overwhelmed with how to accomplish all my tasks and worry about the future. Once I found myself in a rut, I began to worry about students who might be experiencing the same things as me. I decided to start each day checking in with my students via Remind. I’ve been sending a positive note of encouragement each day.  It has become a routine now and a great way to start each day.

My daughter is 12 years old and my son is six. They attend school in the Pattonville School District. Originally, they were not on spring break this week and did not begin their extended break until Wednesday. My husband has also been working from home and is currently using our basement as his office.

I was determined to make today better and more productive than the previous days this week.

I woke up around 8 a.m. which is quite different from my normal 5:15 am wake up (earlier if I make it to the gym before work). My son woke up earlier and had helped himself to an M&M ice cream sandwich for breakfast. I found him sitting on his bed with his iPad on his lap and the ice cream sandwich in his hand. I don’t blame him, who doesn’t want ice cream for breakfast?! My daughter was still sleeping.

I made myself a bowl of Frosted Flakes. I am operating under the assumption that calories on quarantine don’t count. As I ate my cereal, I searched for the perfect quote to send my students.

Eventually, I sent my daughter a text (how else would I communicate with a 12-year-old) and told her to come join me to watch an episode of our favorite new Hulu show, “Little Fires Everywhere.” She asked me to make her breakfast. At first I was annoyed because she is certainly old enough to make her own breakfast, but I decided to embrace the moment and make it for her. I am not usually home for morning routine. She enjoyed a homemade Starbucks inspired latte, ½ a bagel, and an orange – it is important to keep up on vitamin C these days!

After an episode of our show, both kids and I got up, got dressed, made our beds, and straightened up the house. The three of us sat at the table and put in some work time. We interrupted our work time to make lunch. My son had a Lunchable (a tiny upgrade from the ice cream sandwich he had for breakfast). My daughter made herself a cheese quesadilla and simultaneously vlogged her experience. I indulged on some chicken alfredo.  After lunch clean up, we worked a bit more. Our eight-month-old Goldendoodle puppy, Millie, was happy to keep us company as we worked.

As the afternoon sun peeked out, the kids and the puppy went to play in the backyard. I began deep cleaning the kitchen. This consisted of me taking everything out of every cabinet and drawer. Wiping each surface inside and out of each drawer and cabinet. Decluttering and purging unneeded items, reorganizing items for more efficient use, cleaning out the fridge, scrubbing the oven, and cleaning the kitchen windows. This took me several hours. I felt accomplished with this task. The living room is up next, tomorrow!

My daughter, still vlogging, and I spent the early evening making an apple pie. My son spent his early evening napping.  After the pie went in the oven, my husband, son, daughter, and puppy went for a jog around the neighborhood. My daughter is very active and participates in a lot of sports. She is missing her daily swim practices. She self-motivated daily runs with my husband in order to get her daily dose of physical activity.

After their run, my daughter schooled me on the term “glow-up” as she took a shower, painted her toes, and applied a face mask! She asked me to braid her hair which really made me happy. It isn’t often she asks or allows me to fix her hair anymore and this was the second time this week she asked! She has been, constantly, chatting with friends via the app “House Party” this week. She has pulled all of her past vacation souvenir shirts and has been wearing them around the house. It has been very common to see her in a Disney World or Ron Jon shirt this week and all of those happy memories flood my mind and make me smile!

Dinner was uneventful tonight as we had leftover chicken tacos from last night and my son enjoyed bacon and eggs. After dinner, we retreated to separate parts of the house for a while. Before I began writing this, I read a chapter in my new book, “Such a Fun Age,” my son played “RoBlox” on his iPad, my daughter was painting, and my husband enjoyed an episode of his latest Netflix binge, “Peaky Blinders.”

We ended the night with a couple of rounds of Old Maid and Uno. Tomorrow brings a new day and a new challenge to stay positive and productive. I am putting forth great effort to remain thankful for time at home with my family and for time to slow down and enjoy the small things.