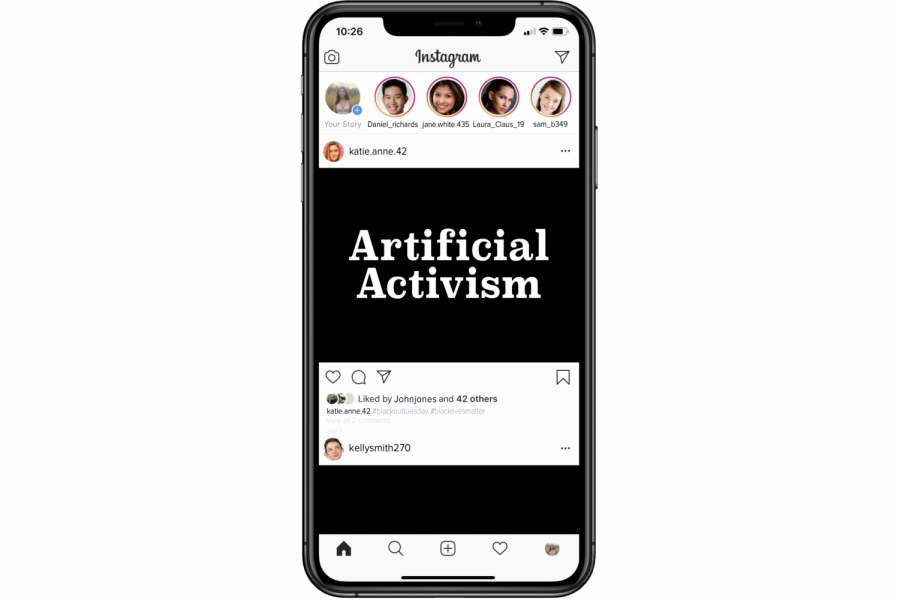 An IPhone displays an Instagram feed from June 2, 2020– Blackout Tuesday. Supporters of the Black Lives Matter movement posted black squares to show their solidarity for Black people in a time of racial injustice.

Insincere support of a cause drowns out actual advocates’ messages

As senior Anna West scrolls through Instagram in the early afternoon of June 2, her screen is periodically flooded with a wave of darkness. Instead of a feed composed of birthday posts and selfies and photoshoots in fields of sunflowers, West’s screen is inundated by an abundance of black squares, each offering support and solidarity for Black people in the U.S. However, West is skeptical; she questions whether the people spreading awareness for the Black Lives Matter movement truly care about the cause.

Upon seeing a post from one person in particular, she is reminded of the time she sat next to him in class a few years prior. As he casually conversed with friends, a slur slipped from his mouth. The nonchalance with which West’s classmate said the N-word caused her to question his motives for posting on Blackout Tuesday. Did he truly change his racially insensitive behavior, or was his social media activism merely a result of not wanting to be labeled as racist?

Performative activism, a type of activism done to increase one’s social status rather than because of one’s dedication to an issue, stretches over many outlets for activists. It ranges from social media posts to protests and rallies. The key indicator of performative activism is one simple, yet potentially harmful trait: disingenuity.

According to Psychology and Sociology teacher Stacey Dennigmann, because  the purpose of performative activism is to increase one’s social stance, it will inevitably come to an end. Once a person thinks they have posted enough, or spoken out enough, or protested enough–once they have been satisfied with the likely minimal change made, their activism will stop.

“When you’re trying to increase your social stance, it’s once you have it, once you’ve attained it: you’re no longer interested. It kind of fades out,” Mrs. Dennigmann said. “If you enter a movement because it means something to you internally, then you’re going to be committed as long as possible. When we look at motivation, internal motivation is always going to outlast external motivation.”

Mrs. Dennigmann explains that despite the temporary nature of performative activism, any attention a cause is given has the potential of being beneficial for its advancement; regardless of why people choose to partake in a movement, their participation brings awareness to it nonetheless.

“There’s always benefits of activism … What happens, kind of more so with performative activism, you see it die out more quickly,” Mrs. Dennigmann said. “But any activism can be good activism because ultimately it’s wanting change.”

Though West herself fervently supports the Black Lives Matter movement and believes there are issues with performative activism, she understands why people who may not be incredibly dedicated would speak about the movement.

“If you’re not gonna post, you’re gonna get accused of being racist… or [people] automatically assume you don’t support the movement,” West said. “[I think] there’s a lot of social pressure. If [someone] sees all these people agreeing with it, they don’t want to seem like an outcast.”

According to Mrs. Dennigmann, high levels of interaction on a social media post can lead to increased self-esteem: likes, reposts and comments can be nearly addictive. Therefore, a post about the Black Lives Matter movement, which would likely receive a high amount of engagement, would be associated with heightened levels of self-worth. For some, this may be the main motivation for making posts in support of the Black Lives Matter movement.

Posting one thing is kind of like the easiest way, and you could post that and still really care, but try to avoid just [taking] the easy way out. Sign petitions, go to protests, just try to take an extra step.”

Regardless of people’s motivation for spreading awareness that is not genuine, or speaking about an issue that means little to them, the downsides of doing so are clear. According to West, the insincere nature of performative activism is incredibly harmful to any cause. In regards to the Black Lives Matter movement in particular, she believes performative activism undermines the message that supporters are trying to spread.

“I think it could give [Black Lives Matter] a really bad name. If the wrong people ‘support’ something, it can be harmful if their actions don’t reflect on the actual morals of the movement,” West said.

Performative activism is a widespread issue, creeping into all corners of the movement. However, there are steps that can be taken to reduce its harmful effects. According to alumna Maddie Bennett, an avid protester and activist for the Black Lives Matter movement, the way to have the greatest impact on a cause is by letting those it affects most lead the way.

“I feel as a white person, it is important for me to support black folks in this stressful time,” Bennett said. “I am prepared to listen, walk in the back, to respect the black organizers [who put] all of their time into creating this action, and to hear black participants’ voices. I know it’s not about me.”

For those who want to avoid minimizing an issue through performative activism, West has a piece of advice.

“Educate the people around you. You don’t have to change people’s opinions, but have a voice,” West said. “Discuss it… and just try to have a voice.”

West’s biggest strategy for spreading meaningful awareness is simple; she does more than the bare minimum, and she urges others to do the same

“Posting one thing is kind of like the easiest way, and you could post that and still really care,” West said. “But try to avoid just [taking] the easy way out. Sign petitions, go to protests, just try to take an extra step.”