One family shares their story of acceptance 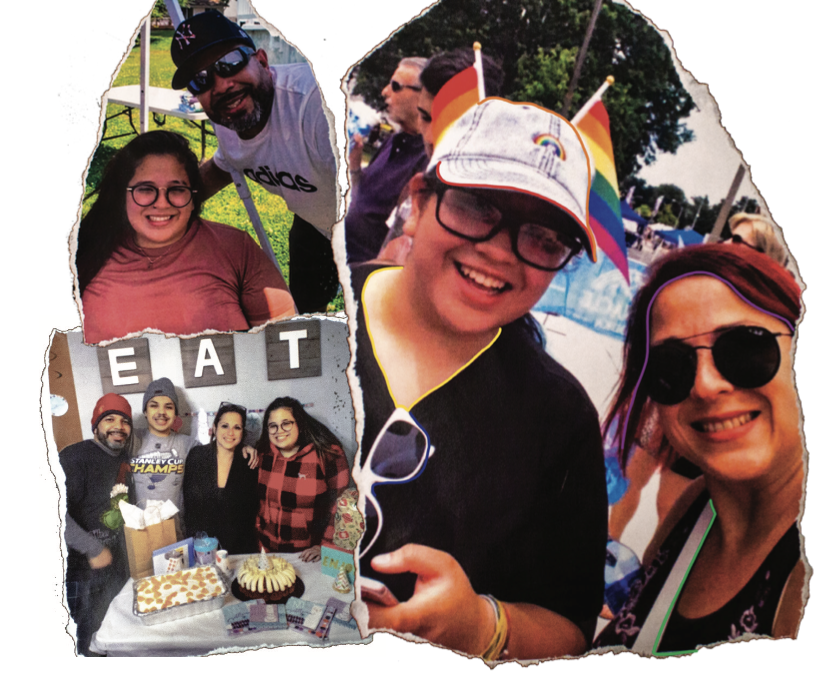 Since as early as third grade, senior Krystal Arias (She/Her) has known she wasn’t exactly like the rest of her peers. Despite this, she never struggled to be social. She identified with her female friends; they would talk about boys they had crushes on and celebrities they adored. There was always a part of Krystal she didn’t see in her friends, however: the part that liked girls. Though Krystal didn’t always have the knowledge to completely understand this piece in the puzzle that completed her, she now recognizes it as bisexuality, or the attraction to two or more genders.

Krystal’s journey has taken up over half of her life, but she didn’t share it with her parents, Lourdes (She/Her) and Henry Arias (He/Him), until two-and-a-half years ago.

Still recalling the exact date she came out to her parents, Krystal describes her recollection of the events with precision, detailing the rollercoaster of emotions she went through while revealing an integral part of her identity.

“I told my parents Nov. 19, 2017,” Krystal said. “I wasn’t nervous to tell them because I knew they would love me no matter what, and that they’d eventually come around… but in the moment I was an emotional wreck.”

Upon learning about her daughter’s sexuality, Mrs. Arias was taken aback. After years of hearing Krystal talk to her about boys, discovering Krystal liked girls came as a surprise.

“The coming out for me… was shocking at first. I think… I was shocked in the beginning because… we’d be watching shows or be out in the street and she’s like ‘Oh my god that guy’s so hot’ and then all of a sudden she’s like ‘Well I like girls,’” Mrs. Arias said. “At the beginning I was like ‘Wait what’s going on?’ but now I think we better understand… there’s so many more identities nowadays that I was unfamiliar with so I’ve had to learn a little bit more about it.”

While Krystal’s mother never suspected her daughter was anything but straight, Mr. Arias always had an inkling that Krystal was attracted to her own gender.

“Once she told me, I was like “Oh, you know… I kind of knew it.‘ For my wife it was pretty shocking,” Mr. Arias said. “It’s my daughter, and I love her no matter what. It was something new for us, but… we learned how to deal with it.”

Mrs. Arias shares the same unconditional love her husband has for Krystal, and she never let a once confusing label change that.

“I’m a pretty open-minded person and I have always taught my kids to… love everyone,” Mrs. Arias said.

Though her love for Krystal never wavered, Mrs. Arias did have worries about the hardships Krystal may experience due to her sexuality.

“[As a parent] you worry about all the stories that you hear in the news, like bullying or people that are [going to] dislike her, what’s the family [going to] think? You go through all those things in your mind, and obviously it wasn’t that we didn’t accept her or love her… it was what the outside world is [going to] think, what was she going to go through?” Mrs. Arias said.

Despite the concerns Mrs. Arias had, she wanted to do only one thing: support her daughter.

“I think that we just have been supportive to her like we have been accepting of what she is and… the decision she made,” Mrs. Arias said. “We try to make her partner feel as welcome and loved as we can… We try to tell her all the time that we love her no matter what, and I’m just happy that she can be herself. For me it was always I wanted my kids to be happy, however they are.”

Because of how Krystal’s parents reacted to her sexuality, she has been able to be her true and authentic self around them.

“I’m the happiest I’ve ever been honestly,” Krystal said. “And a huge chunk of that is because of them.”

Though Krystal’s parents never had any trouble accepting her for who she is, Mr. Arias has some advice for parents who may be more apprehensive about their children’s identities.

“At the end of the day, that’s your son or your daughter. You’ve got to accept them as they are… You always want to see them happy,” Mr. Arias said. “I know for some people it might be hard, but they’ve got to work on it… because otherwise, you’re [going to] have a miserable kid.”

Mrs. Arias agrees; regardless of a parents personal beliefs, the most important thing they can do is support their child.

“Every parent wants the best for their kid and they want them to be happy. If you don’tsupportthem,they’re[goingto]goto somebody else that might not give them the right advice. I know you might think that it’s [going to] be hard, but… [when you] accept them, they’re happy, they trust you.”