Senior Jordan Handley chooses a career as a band director. 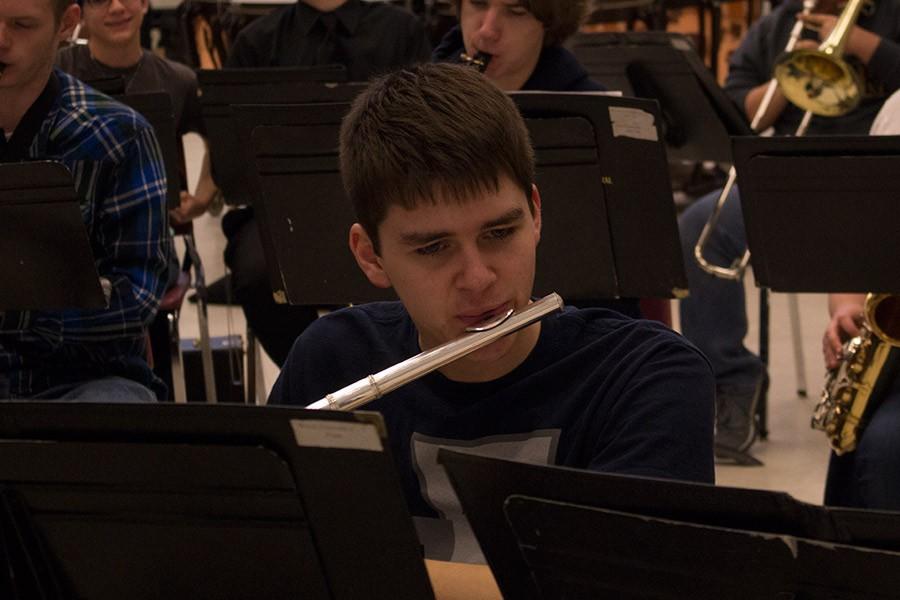 Senior Jordan Handley plays a chorale the flute in the Wind Ensemble.

Handley is going to go to school for music and pursuing the career of a band director.

Often students find themselves at a crossroads, knowing possibly their major but not a career choice. When Handley was faced with this, he looked to his experience to choose.

“I enjoy going to band every day and I’m in three band classes right now, concert band, symphonic band, and wind ensemble, and a lot of people are like ‘that really sucks’ but I actually really enjoy being able to interact with all the different musicians, and listen to the band classes, and just really appreciate music.” Handley said.

Whenever choosing a career, people often model their choices after their inspiration, or what they enjoy. Handley found security in both.

“Actually, I’m kind of modeling after Mr. Griffin and Mr. Messerli. Ever since I got into band over at Saeger Middle School with Mrs. Crepps, I was like ‘That is what I want to do,’” Handley said. “I know when I started playing my flute, the first year kind of sucked. I wanted to quit and Mrs. Crepps was like, ‘No, you’re really good, keep doing it!’ and then ever since she kind of gave me that push it’s been really helpful for me to keep going, with the thought of ‘I’m good at this, I need to keep going.’”

When choosing a major, people throw their opinions left and right, and once you announce an uncommon field like music, the critics get harsher. People may say that musicians won’t get any money, or will be unhappy with their choice. Music seems like a dead end career to many, but Handley is looking towards the light at the end of the tunnel.

“It’s what makes me happy, actually, it sounds kind of cliche, but if you do what you love, I don’t think you will ever work a day in your life – also really cliche, but it’s true,” Handley said.

Luckily, his parents are supportive of his decision, and even a little enthusiastic.

“My dad definitely supports me, ever since I got involved with band he’s like, ‘I’m going to all your concerts and going to all the fundraisers!’ and he’s really involved,” Handley said. “My mom is kind of supportive but not as much. My dad’s really in with the band boosters and that extra stuff, whatever he can do to help is really fantastic.”

Handley has decided to pursue a career in music at Lindenwood University, a college close by.

“I’m planning to go to Lindenwood, mostly because of money. It sounds kind of awful but I’m supposed to get either a free ride or really close to a free ride, and then the location kind of helps too, being close to home and being familiar with everything around,” Handley said.

Being able to be comfortable in school and your choices is always important, and whenever school is willing to give that opportunity, the aid is always welcome.

After choosing a major, some students even decide to take the extra steps down that path. People may decide to become interns, shadow people living their careers, or get in touch with future colleagues. Handley has taken full advantage of this and spoken to the band directors here at Francis Howell Central.

“I’m kind of late on a lot of the stuff but talking to Mr. Messerli and Mr. Griffin about band careers and what to do and what not, they recommended lessons and auditioning for Metro 8, and kind of really taking those extra steps,” Handley said. “I kind of regret not getting into it earlier, but I’m glad I’m getting into it now because I guess better late than never.”