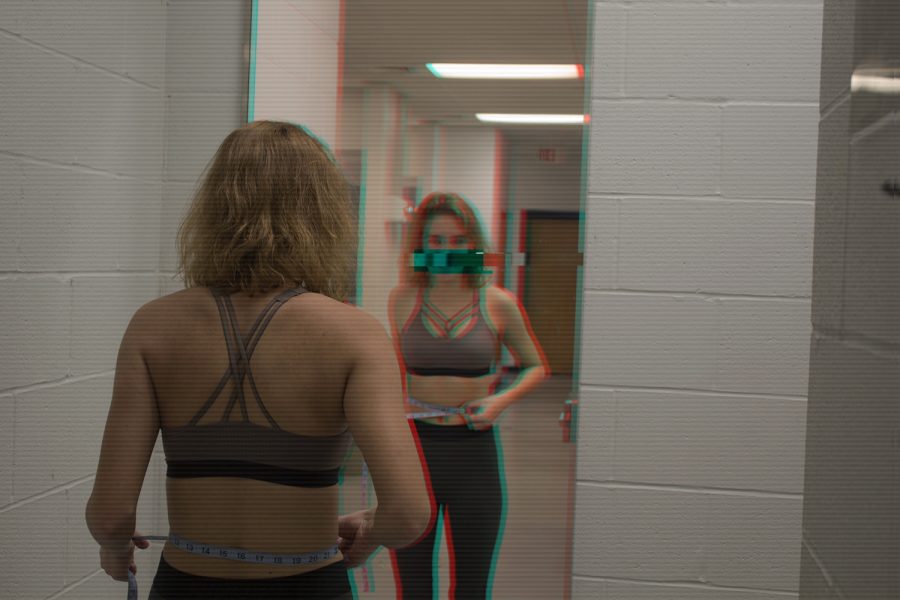 A girl looks into a mirror, measuring her waist. People affected by eating disorders often feel inadequate in their appearance and turn to unhealthy methods to become happier with themselves.

Forced To Fit (In)

The ideal body is plastered all over social media, ruining the self esteem of young individuals

She pushes through the group of students crowding the door as the bell rings. Her laces are caught under her shoes as she hurries to the cafeteria. She shuffles through the lunch line and grabs a lunch tray as quickly as possible. The vegetables on her tray remain untouched for the entire 25-minute lunch period.

In fact, she rarely glances down at the tray full of food as she makes her way into the bathroom, shoving the door open and quickly locking it. She takes a deep breath and sits on the toilet. The thought of eating makes her uncomfortable, disgusted, and weak. She sets the tray out of her way and starts working on homework instead, drowning out the sound of her stomach rumbling with the ruffling of papers. Another day goes by and not one meal has been fully digested. As she realizes lunch is about to end, she wipes her tears from her cheeks and unlocks the stall door. Her mind is flooded with negative thoughts and the flawless image of what she could be drilled in the back of her head reminds her that she never can be what everyone else is.

Almost invisible to the naked eye, eating disorders are more common than uncommon. The pressure to be perfect is advertised all over social media and in everyday society. The minds of people both young and old are tricked into thinking the ideal male body is big and bulky, or the most feminine a woman can be is with her hourglass shape and tiny figure. These images are constantly plastered into the brains of countless people, and while some can push them aside and shrug it off, others feel that this image is a must-have, and automatically feel uncomfortable and sickened with their body. So, they change what they think is the reason behind their unbearable structure; food.

Eating disorders can mean different things for different people, like any other psychological disorders, they vary from person to person, which means they see the words ‘eating disorder’ and think of divergent ideas.

Junior Kathleen Tallmadge* described eating disorders as a change in eating habits that leads to becoming a mind game that your brain controls.

“It’s an abnormal eating habit that affects the person negatively in mental and physical health,” Tallmadge said. “It’s when someone purges after they eat, or they barely eat in a day, or they eat way too much. Things like that.”

Junior Elijah Calignaoan, who has suffered with an eating disorder, defined them as something unique. “A quirk in the brain- a trick in yourself to believe what is wrong, is actually right,” Calignaoan said.

According to the National Eating Disorders Association, people that struggle with body image and a lower self-esteem tend to be more likely to develop an eating disorder.

Like someone’s definition of an eating disorder, their struggle can be different, especially how and why their eating patterns start changing. Calignaoan described how his eating habits started to slowly change.

“It just started with not eating for a day, then two and so on,” Calignaoan said. “My body just got used to not eating for a day or two at a time. It was definitely unhealthy and my friends said what I was doing was dumb and I should eat, but it wasn’t that simple. I tried eating at school and I felt lightheaded and sick. I have no idea why but I just did.”

Tallmadge also went on to explain how her habits changed and how little she would eat each day just to achieve the body society deemed as ideal.

“The [eating habits] started to form because I used to get bullied about how fat I was and how I was just bigger than everyone at school,” Tallmadge said. “And so I became extremely self-conscious. I admit that I wasn’t as skinny as others, which led to negative thoughts that started making me nauseous every time I ate food, so slowly I ate less and less to where I was eating maybe 300 [calories], sometimes less, a day.”

Although everyone’s upbringing can have different factors, they usually share one common aspect: image.

“I know it boils down to self-esteem,” Calignaoan said. “That’s the simplest way I can put it.”

According to the National Eating Disorders Association, bullying pushes the likelihood of an eating disorder forming. Bullying can lead to a decrease in self-esteem, social isolation, and poor body image, which ultimately lead to the sudden change in eating patterns.

Calignaoan also described why his habits began to change and what brought him to adapt to different eating patterns.

“As someone who has been harassed because of weight, I would do anything just to lose some more pounds just to be accepted,” Calignaoan said. “That stuck in my subconscious and I kept on continuing.”

Tallmadge elucidated that she started noticing her eating habits changing after a while. After Tallmadge noticed, her mom noticed not only how she had changed, but also the way she ate and what she ate.

“My mom noticed that there was something wrong,” Tallmadge said. “I wouldn’t eat breakfast or dinner with my family anymore because I was embarrassed.”

Calignaoan claimed that it didn’t have much of an effect on his friends or family, and that it was more personal.

“I feel accepted at home for who and what I am,” Calignaoan said. “I can eat when at home. Occasionally I’ll throw up but that doesn’t involve them. I keep to myself because I believe it would be harder to work on myself when they are constantly injecting themselves into my conflict.”

Despite knowing the consequences and effects on the body, Calignaoan claimed that he knew he had an eating disorder from the beginning, and didn’t do anything about it.

“I absolutely knew I had an eating disorder,” Calignaoan said. “I knew what I was doing from the start. I truly wish I knew why I chose to be weird and do this to myself but I did. No harm, no foul. But there was harm and I didn’t really see it at the time. Looking bad not too long ago, it’s clear as day what it did to me mentally.”

Without a doubt, having an eating disorder and the sudden change in eating habits affects your physical health and appearance, but it also affects your mental health.

“It’s definitely changed my personality,” Tallmadge said. “It seems like I’ve become a little more serious and I apologize for my actions–even if it was just talking to someone.”

As stated by the National Eating Disorders Association, having an eating disorder affects your cardiovascular, gastrointestinal, and endocrine systems, as well as impacting you neurologically.

With this being said, Calignaoan went on to explain how it impacted him mentally and the lasting effect it had on him.

“It has affected me so much,” Calignaoan said. “I lost a lot of respect for myself. It only damaged my already low self-esteem and I fell into a hole that left me with scars. It was not worth it.”

I lost a lot of respect for myself. It only damaged my already low self-esteem and I fell into a hole that left me with scars. It was not worth it.”

Tallmadge explained the symptoms she experienced with having an irregular eating pattern.

The National Eating Disorders Association listed refusal to eat certain foods, signs of uncomfort while eating around others, and skipping meals as just a few symptoms or signs of an eating disorder that is either present or forming.

With different symptoms come different coping mechanisms and adaptations, which can be very unique to the person possessing the eating disorder.

“It’s a slow process for me personally because I don’t have the kind of will power some people do,” Calignaoan said. “I just snack a lot now. I eat light stuff often so I don’t feel grossly stuffed from one sandwich.”

Tallmadge mentioned that she goes to a therapist for her eating disorder and has grown to track her calorie intake.

“I go to a therapist and I have this calories notebook,” Tallmadge said. “Whatever I eat I write it down and how many calories were in it. It’s to make sure I eat what I should to function properly and it’s there so I don’t eat less.”

According to the National Eating Disorder Association, treating an eating disorder generally involves a combination of psychological and nutritional help, along with medical and psychiatric monitoring.

“It wasn’t worth it,” Calignaoan said. “I want everyone to know it’s just not good for you and it may be affecting you more than you think. With it affecting you, it then affects people around you. Having loving friends and people who boost you up is important. Not just for eating disorders, but for life.”

Forced To Fit (In)