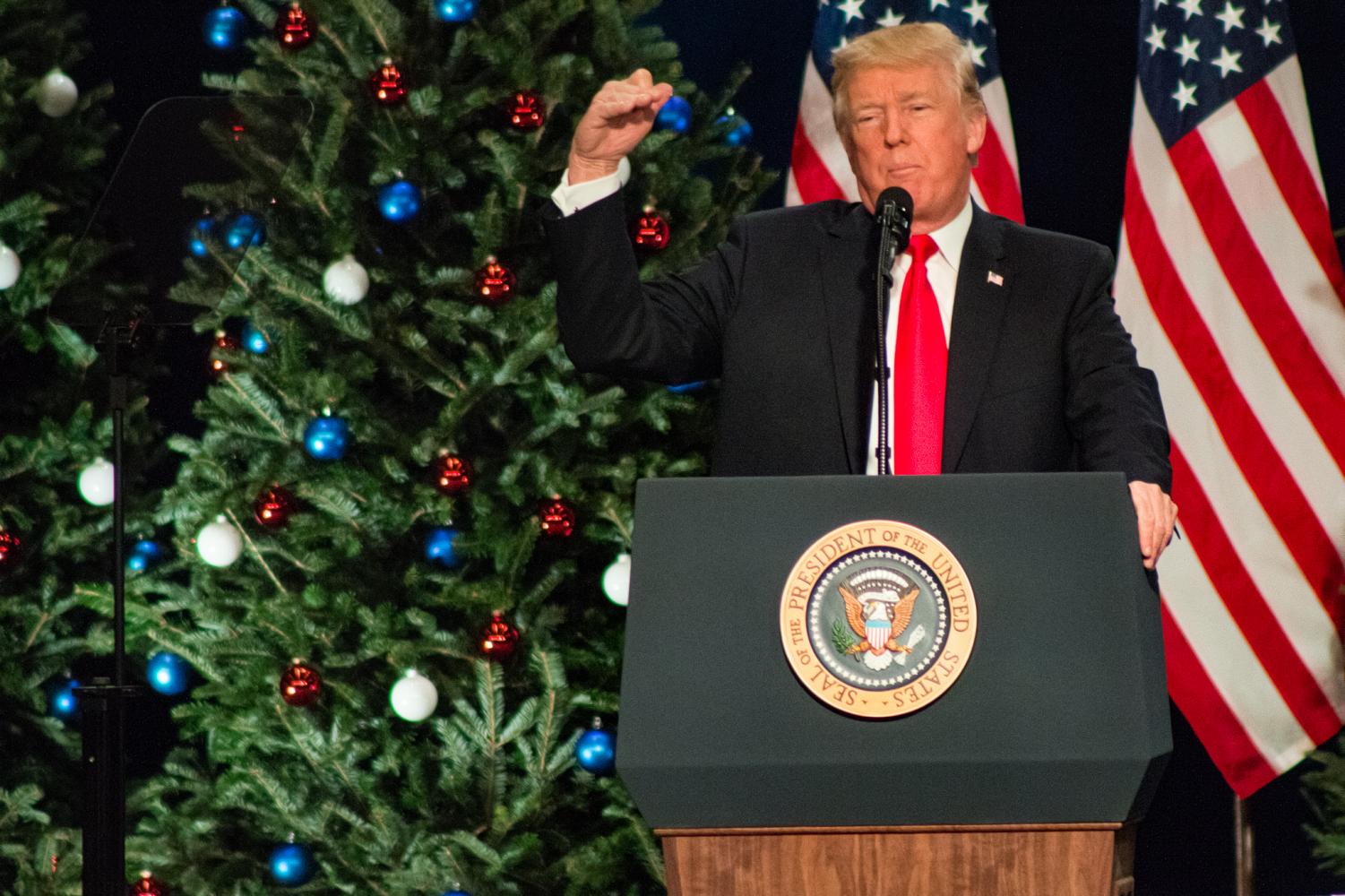 In this photo from December 2017, President Donald Trump speaks at the St. Charles Convention Center to a group of supporters. Just more than two years later, the U.S. House of Representatives would pass two articles of impeachment against President Trump accusing him with abuse of power and obstruction of Congress. (Sydney Robbins)

In this photo from December 2017, President Donald Trump speaks at the St. Charles Convention Center to a group of supporters. Just more than two years later, the U.S. House of Representatives would pass two articles of impeachment against President Trump accusing him with abuse of power and obstruction of Congress.

The House of Representatives made history on December 18th with their decision to impeach President Trump, making him only the third president in this nation’s history to be impeached. President Trump was charged with both articles of impeachment, with a vote of 230-197 for abuse of power and a vote of 229-198 for obstruction of Congress.

The impeachment comes 85 days after Speaker of the House Nancy Pelosi’s announcement of the opening of the impeachment inquiry. The inquiry was opened up in response to reports that President Trump abused his power when he pressured Ukraine to investigate his political opponents. Trump withheld $400 million in aid from Kiev, as well as a white house meeting with Ukrainian President Volodymyr Zelensky. Trump is also being charged for obstruction of Congress due to his blockade of subpoenas and refusal to allow senior officials to testify before Congress.

“I wasn’t that shocked because I know there has been a lot of conflicts and some friction lately.

“I don’t think it impacted me greatly because it doesn’t affect me directly in my day to day life, but I still think it’s a thing that everyone should be aware of because it can affect us all in the future. These are issues that I think people need to be well educated on in order to know where their future is going and possible outcomes later on.”

“Some of my opinions may be in line with the president, but one does not get impeached for no reason.”

“I do not believe [President Trump] will be removed from office. The senate is primarily republican, not only do they need a 50 percent vote, but Democrats would have to convince 67 percent of the Senate to remove him. Which just seems improbable at this time. Unless Trump committed such an atrocious crime that it would blur party lines, I don’t see him being removed during this term at all.

“Although I believe it is an injustice to allow parties to excuse crimes for their own gains, I also understand that the people have a voice during the upcoming election. I believe everyone that can vote in the 2020 election should express that right, on either side, to speak up about what they believe in.

“It’s also important to realize that power corrupts. Right now, all eyes are on Trump, but this doesn’t mean other people are clean. It is important for the American people to question those they should put their trust in and stand up to protect their rights as well as their neighbors.”

“I heard about the impeachment vote last night (December 18) when I saw it on Apple News.”

“My initial reaction was probably just shock and disappointment that we’ve gotten to this point. It’s just now setting in how historic something like happening is as he’s just the third president to be impeached. It’s all just been crazy seeing all of this partisanship hate over the past couple years.”

“I don’t think he will be removed from office. The Republican Party is in the majority and mostly all of them will back Trump and not allow this to get any further.”

“The vote itself impacts the country in further separating us by party lines. The Republicans think that this will all backfire in the 2020 elections while the Democrats believe the opposite.”

“The quick rundown is the Dems have the majority of seats in the House so they carry the votes to officially file articles of impeachment and so that’s what they debated on and voted on last night so… we are waiting for them to deliver that vote to the Senate. If and when they deliver the vote to the Senate, the Senate will hold the trial. But since it’s a partisan process, the Republicans have the majority of the seats in the Senate, and it would be against party lines for Republicans to vote for impeachment so if this continues to play out in true partisan fashion, it’s more than likely that President Trump would be acquitted of the charges that were filed in the house, so it’s just kind of a wait and see.”