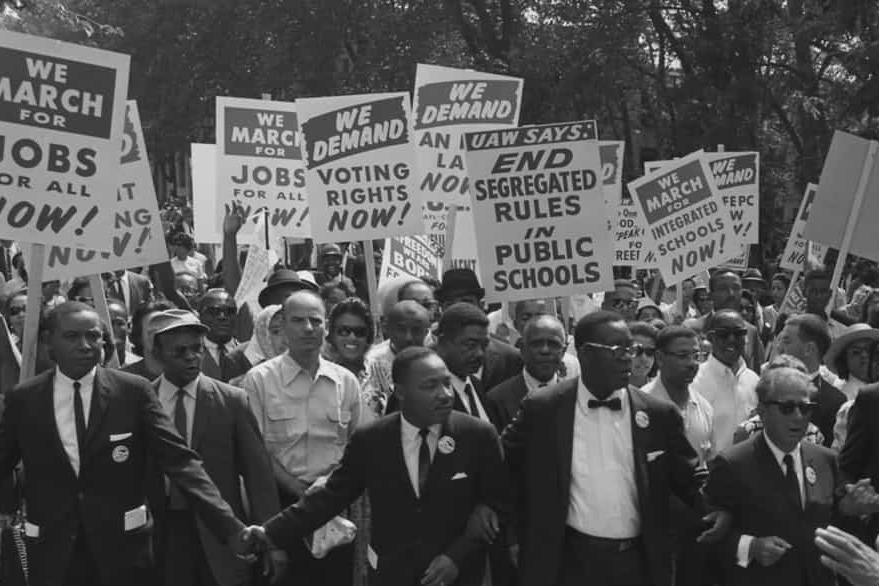 Civil Rights activist Martin Luther King Jr. leads a group of protesters at a rally in the 1960’s. Like the Civil Rights movement, current protests have become a popular way to show support for racial equality

As protestors wipe the sweat off their foreheads and tears off their cheeks, they march forward. The streets are full of people treading towards the Lincoln Memorial as the late August sun beams down on them. Protestors are carried out of the crowd because of heat exhaustion. Regardless of the discomfort and scorching heat, they march forward. 57 years later, history repeats itself. The fight for equality has been watered down since the end of the 60’s, but lately it’s been brought back to the limelight. As the Black Lives Matter movement storms media outlets and catches the eye of many all across the country,  Martin Luther King Jr.’s “I Have a Dream” slowly turns into “No Justice, No Peace” being cried all across America.

The demand for justice and equality in the U.S. is one of many examples of history repeating itself. Marches and protests for progress are nothing new in our country, with the historic March on Washington being held in August of 1963. Essentially, the Black Lives Matter movement is a prolongation of the racial injustice following the fight of the Civil Rights era. The death of George Floyd that sparked today’s protests can be compared to the death of Emmett Till, a key contributor to the start of the Civil Rights movement.

Senior Taylor Krieg participated in a BLM protest in the area and commented on the similarities between today’s marches, and those held during the Civil Rights era.

“It wasn’t until I went to a protest and saw hundreds of people march together, yelling the names of innocent people murdered simply for the color of their skin, that I noticed this nation has failed all who participated in the Civil Rights movement,” said Krieg.

Another student who engaged in a BLM protest in our area is senior Krystal Arias, who stresses the importance of protesting and how it results in slow change.

“I think the protests can do great things and hopefully will,” Arias said. “As much as I and a lot of others want things to change in the justice systems, I honestly don’t believe it will anytime soon. But, we won’t stop fighting until it does.”

Additionally, senior Gabryelle Loggins compared the struggle during the Civil Rights movement to today’s Black Lives Matter movement, and although she is unable to attend a protest, she heightened the fact that people of color are still pushing for justice.

“The only difference is the time period,” Loggins said. “We are still fighting to be equal.”

Loggins also commented on the sense of gratification she possessed after seeing people protest.

“Seeing people there made me feel unapologetically black, beautiful, and proud that my people could come together for the greater good,” Loggins said. “I think people became involved because they know for a fact there has to be change. I had no choice but to become involved because this is my reality, and this reality is going to change.”

Historically speaking, the Black Lives Matter movement and Civil Rights movement share a great amount of similarities, but they also have their differences. For example, the Civil Rights movement had its leaders who spoke out against the problems with racial injustice like Martin Luther King Jr., Rosa Parks, John Lewis, and Robert F. Kennedy. With the Black Lives Matter movement, the key figures are people of color who have been murdered, like Michael Brown, Trayvon Martin, Elijah McCain, Breonna Taylor, and George Floyd.

“Segregation might not be legal anymore,” Krieg said. “But that’s not stopping anyone from mistreating a person of color, especially the people that are supposed to protect them.”

Furthermore, Arias emphasized the impact protests have had in today’s society and how much progress we’ve made, if any.

“Things have changed, obviously,” Arias said. “But, things haven’t changed, because [black people] are still getting treated like garbage.”