Are individual officers at fault for police brutality, or is the system responsible? 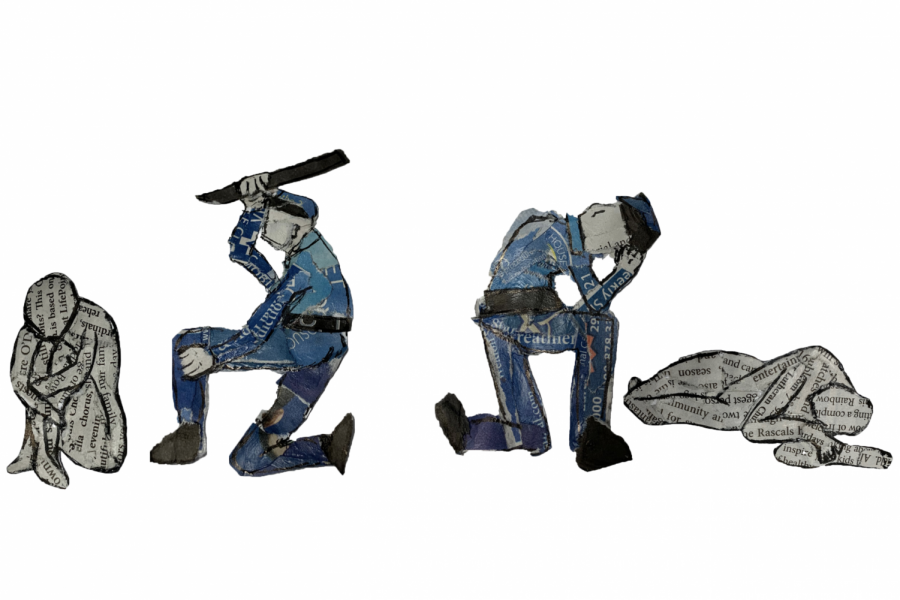 A police officer kneels with an injured individual; another raises a baton, striking a person who cradles out of fear. The figures are made of newspaper, demonstrating that, regardless of whether explicitly stated, much of the media has taken a stance on the topic of police brutality.

Unfortunately, not everything is black and white. The yins and yangs of our universe aren’t separated with clear lines. The morality of our actions is, and forever will be, ambiguous. Trying to separate the good from the evil is not an easy task and should not be taken lightly.

The growing concern for the ethics of this country’s police system is no exception to the ambiguity within the roots of society. Drawing the lines between what an officer can and cannot do with a moral compass varies from person to person. Yet while politicians and activists debate on where these lines are, citizens are being killed.

Terrance Thompson, a security officer at Francis Howell Central with more than 20 years under his belt often works and is associated with police and law enforcement. He sees and acknowledges the good officers do for Saint Charles County, but also sees the flaws in police departments across the country.

“When I was 13 years old I was walking to the laundromat and I just happened to run into a police officer that was patrolling the area. For no reason, whatsoever, he decided that – I was carrying loads of clothes in my hands – for no reason, he decided to walk up behind me and ask a bunch of questions. I went to ignore him and he slapped my stuff out of my hands and pushed me and asked me questions and I’m like, ‘Why are you doing this? Why are you touching me? Why are you bothering me? I’ve done nothing wrong.’”

“I mean it’s just certain experiences I’ve had to let me know there is a better way to do the job,” said Officer Thompson.

Police brutality has been a recurring theme in the media for the past several months. It is undeniable that police brutality is present in our society, but there is plenty of debate over where the problem is, and who exactly is at fault. Blame has been put on the affected individuals for not cooperating with law enforcement, officers for being racist or abusive of their position, and the police system as a whole for leading law enforcement with more power than justly deserved.

When asked about where the problem of police brutality arises, Officer Thompson is inclined to believe a disproportion of power might be the source.

“There has to come a point where you as a police officer [realize that] you’re not the judge, you’re not the jury, and you’re not the executioner,” Officer Thompson said. “If it’s possible to apprehend and arrest this person, do that. Don’t take it upon yourself to decide whether or not they live or die. That’s not your job.”

“I believe for certain aspects of police, it’s a superiority complex. [Officers think] ‘I’m a police officer, I can basically do what I want. I don’t have to justify it, I don’t have to give a cause for it. I’m willing to support any police officer… but there has to be accountability somewhere.””

“The police training program has many flaws,” Willis said. “I know many people that have gone through the academy and as soon as they are put in the field they quit. They aren’t prepared enough for all the stress and fear they’re about to endure.”

The issue of police training not being satisfactory for serving the public has been brought up time and time again. According to the University of Missouri Extension Law Enforcement Training Institution, “[officers] receive almost 700 hours of training that exceeds Missouri’s minimum requirements for peace officer certification.”

Although exceeding the minimum may sound positive, the 700 hours received still isn’t much in comparison to other occupations. For example, in Missouri, the requirement for a barbers license is 1000 hours minimum (according to a Beauty License Directory).

Senior Carson Howe’s father has been an officer for the Saint Charles County police department for over 20 years. Howe remarks that he and his father have very different opinions on the topic of police brutality. Howe also believes, like Willis, that the training officers receive may need change.

“Our training systems vary wildly from state to state, even county to county, causing no real generalized training for officers, meaning one county could be having officers trained to kill while another [trains] officers to use deadly force as a final option,” Howe said.

Current media has been persistent in blaming individual officers and the police system in its entirety. Howe sees both sides to these claims.

“I believe the individual officer[s] should be held accountable for their own actions and those actions should not be reflected on the entire system and police everywhere,” Howe said. “I do, however, believe there are issues with the system, in that there are very few ways to enforce proper transparency with the public.”

On the other side of the same token, Willis acknowledges there are several individual officers who do benefit the community and represent the system with honor.

“The officers I know went into that line of work to help people in the communities,” Willis said.

Her father, who used to face crime on a day-to-day basis, was promoted to Lieutenant and no longer interacts directly with those who need officers.

“[My father] told me it’s upsetting because he misses the feeling of being able to change someone’s life the best they can with each call,” Willis said.

Because some officers do wish to change lives, phrases like ACAB (all cops are bastards) might invalidate the risks they take to protect others. ACAB attacks not only the individual officers but also the law enforcement system in its entirety. Howe feels, similarly to Willis, that these remarks should not be taken lightly and may be out of place.

“Consider these officers as human beings too, they have to deal with some of the darkest parts of the human psyche, and many times watch as officers around them begin acting as thugs, threatening and wielding power over those they’re supposed to protect. So in short, [ACAB supporters] have become so ignorant to the point they cannot see the individual behind the uniform,” Howe said.

Despite the individuals Howe references, and even Lieutenant Willis who represents the good in the police system, Officer Thompson believes there are other officers who have a poor mentality about their job.

“I believe for certain aspects of police, it’s a superiority complex. [Officers think] ‘I’m a police officer, I can basically do what I want. I don’t have to justify it, I don’t have to give a cause for it’,” Officer Thompson said. “I’m willing to support any police officer… but there has to be accountability somewhere.”

Regardless of where the problem of police brutality stems from, there is also debate over a possible solution. The media has pitched the suggestion of defunding the police entirely. Some have suggested different methods of training, stronger background checks, and routine psych tests. Others call for change with how we interact with officers to improve the culture of citizen/police interactions.

Officer Thompson urges the necessity for a police department despite police defunding activists.

“When you’re talking about defunding the police, [think about] if you were to take the police away, there would be anarchy in this country. So we need the police, but we just need a different mindset in that uniform. And that goes about doing background checks and different [requirements],” Officer Thompson said.