How transgender teens accept and embrace their identity

Like any student after a long lecture, senior Seth Wilcox (He/Him) headed to the bathroom before his next period. Except unlike other kids, Wilcox experienced threats, physical assault, and verbal abuse all from restroom visits. Wilcox is a transgender male within our student body. Out of fear, he chooses not to use the restroom at school anymore, not because he wants to but because he will not put his safety in jeopardy.

“It is not a good situation to be in, so I avoid anyone that could possibly cause me harm in any way, shape, or form,” Wilcox said.

A student should not have to live in fear everyday by simply trying to use the restroom, according to Wilcox. It is petrifying to have to think about being physically beaten, assaulted, or threatened just when doing the most mundane activities.

As society evolves, we see more and more transgender individuals comfortable with expressing their true identity. Unfortunately, seeing full acceptance for trans youth is a controversial issue in society.

Whether it’s transphobia from others, internalized transphobia, or simply the ignorance of not understanding this group of people, they continue to face adversity in becoming the real them.

Freshman Jay Shore (He/Him) expressed that his self- confidence went on the decline after sharing with others around him that he is transgender.

“Some people in my life were not very accepting,” Jay said. “They would try to keep me from others or insult me, and it really affected my self-esteem.”

Transgender youth face these situations on the daily. Whether it be people mocking them, comments in the hall, or glares from people in the supermarket, Seth and Jay always feel they are being judged in some way by someone.

“There is a group of kids that make it a point when I leave school to call me the local tranny,” Wilcox said. “I have no idea who they are, but they make it a point.”

Similarly, Jay shares his specific experiences dealing with transphobia and being his true self.

“The most difficult thing about being transgender is all the trouble I get from others,” Jay said. “When my friends parents found out I was transgender, they said they could not talk to me, or even associate with me.”

As a school, teachers, faculty, and administrators should do everything in their power to make transgender youth feel more comfortable being who they are in a very public setting.

Seth shared his experience of having a teacher create a stellar environment for him to be himself.

“My Spanish teacher always refers to me with male spanish terms like chico or señior,” Wilcox said. “I love her to death, she is my favorite teacher.”

Spanish teacher Jennifer Mertz says she supported Wilcox from day one in his transition.

“Supporting Seth through his transition was a no-brainer for me,” Mrs. Mertz said. “I didn’t know Seth before his transition but when his parents reached out to me and told me that the name on my roster wasn’t the name he chose to be called, it was an easy switch.”

Additionally, Mrs. Mertz said she knows how hard it is for students to be themselves and that is why she supports anyone for who they are.

“I’ve struggled with my identity being a part of the LGBTQ+ community myself, and it takes a lot of bravery to tell someone who you are,” Mrs. Mertz said. “Our trans students should not be punished for taking that step and it takes no effort to make sure someone who is trans feels normal.”

She emphasized how crucial it is, to her personally, to make even the smallest changes to support a student.

“Seth is a wonderful student with incredible intelligence,” Mrs. Mertz said. “I believe in accepting people for who they are, if making small changes in my vocabulary is how I can do that, I will.”

Mrs. Mertz also added transgender individuals should continue to be supported because they aren’t any different from what others define as normal people.

“It’s easy for us to use a different name when someone gets married, and this is no different.” Mrs. Mertz said. “They are not a different person when they transition, they are just a different gender.”

Mrs. Mertz says the most important part to supporting trans people is to remember they are like everyone else.

“Transgender people are people, and they deserve to be treated as such,” Mrs. Mertz said. “It’s my job as a teacher to respect all students in my classroom, and making sure trans students have someone who won’t misgender them or deadname them is a part of that.”

Additionally, Jay says he has had a huge supporter in his life through his sister, Sophie Shore.

“She has been one of my biggest supporters throughout my entire life and as soon as I came out she was as supportive as she could be,” Jay said. “She used my correct pronouns and called me by my right name. She is basically my shelter from the storm.”

Sophie shares that she has felt being there for her brother has been crucial in supporting who he is.

“I am obviously supportive of him because he is my closest sibling,” Sophie said. “I would support him no matter what he feels he needs to be.”

Sophie added the crucial nature to being an ally because she knows the struggle transgender people are going through.

“They are going through a tough time and are trying to figure out who they are,” Sophie said. “It’s so important for them to know that they will always have someone to be there and support them.”

Recently, President Joe Biden also voiced his support for transgender Americans in his presidential speech to congress on April 28th, 2021, saying they are brave people and he has their back. Seth expressed how much he agrees with the statement the president made.

“What he says is true. People who are transgender are brave and very resilient when it comes to all the factors they must deal with,” Wilcox said.

Commiting to their transition and who they are is the most rewarding part for transgender students, realizing they are becoming the true versions of themselves. Usually, transgender youth feel trapped in the gender they were assigned with at birth.

“When I was a kid I never really fit into a specific box,” Wilcox said. “Once I hit middle school, when puberty set in, I was shoved in the female gender box and knew that didn’t match who I was.”

Knowing he did not feel he was his true self with his birth assigned gender, Wilcox took to researching if there was a term for how he felt.

“I looked up on the internet and was like ‘Oh there is this word for transgender, that makes a lot of sense’,” Wilcox said. “I have identified with that for about five years now.”

Jay also agrees with Wilcox in that the smallest first step in identifying who they are is very rewarding.

“A couple years ago I tried to force myself to think I was in the right body,” Jay said. “When I started shopping in the men’s section, that was when I began to feel a lot more comfortable with myself and who I am.”

The continuation of support for our trans youth is crucial to their self-confidence. Many trans kids feel their most rewarding thing about transitioning is committing to becoming their true selves and seeing their peer support.

“Being out has really helped me be myself and unapologetic about it,” Wilcox said. “Being around friends who are like ‘Seth you’re amazing’ I’m like ‘Yeah!’ or my boyfriend who’s like ‘You’re the best person ever and an amazing boyfriend,’ is incredible.”

Similarly, Jay shares how his self- confidence has shot up since transitioning, and how he has changed as a person.

“Transitioning has made me more confident in myself,” Jay said. “Everyone I am close to has supported me and I have become more outgoing, more happy, and more open to other people.”

The most crucial thing to understand about the transgender community is that they are normal people according to Wilcox. They are just like everyone else. 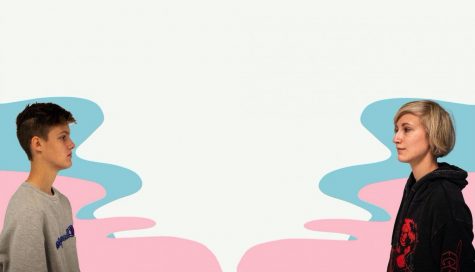