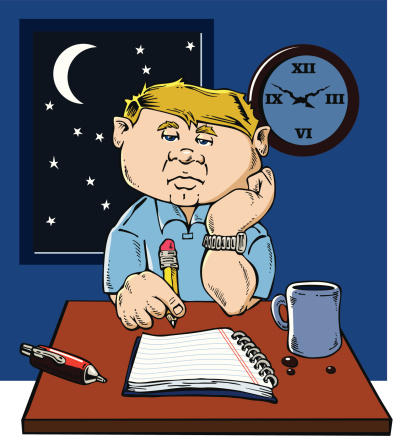 A look at some of FHC’s various sleep deprived students, and how their lack of sleep affects their school lives

Sleep, the wonderful luxury, the satisfying sensation, the perfect state of relaxation. All these descriptions come to mind when one thinks of sleep. Our slumber is the one thing that is ours, the one thing we can enjoy for ourselves and have to share with no one else. It’s even necessary; though the feeling of curling up in one’s bed and keeping warm under the covers comes off as only an enjoyable thing, the required amount of sleep for the average adult is eight to nine hours, meaning that it’s actually a good thing to stay in bed for as long as possible. While seven to eight hours is the needed amount of sleep for the average person to stay in bed for, many people do not experience the enjoyment of that many hours of sleep. Students in particular have a hard time managing to do this, due to their busy schedules (consisting of clubs, sports, jobs, studying), and often end up sleep deprived and begging for one night to have a good night’s sleep. In fact, in 2009, only 31 percent of high school students reported getting at least eight hours of sleep on an average school night (according to an article published by the CDC).

Among the wide range of sleep deprived students is senior Roger Lewis. Lewis’ sleeping patterns don’t really consist of sleeping at all really, and consist mostly of whatever sleep he can manage to gather. Lewis lack of sleep stems from the many activities outside of school he participates in, most of which include working at Gordon’s food service marketplace, participating in FHC’s theatre department, modifying moped engines, and browsing the internet. Lewis described how his a lot of his bad sleeping habits stem from his love for browsing the internet for many hours each night, after already having worked at theatre and at his job.

“On average I usually get two and half to three hours of sleep [each school night],” Lewis said. “Mostly because I like Craigslist a lot.”

Despite the extreme lack of sleep he experiences, Lewis is immune to the adverse effects of staying awake for hours on end. Lewis feels relatively normal and claims he has gotten used to needing little amounts of sleep to feel well.

“Four hours makes me real ready for the day,” Lewis said.“I feel normal for the most part, for my standards at least.”

“Sometimes it affects me. You know when you take naps in the middle of the day and you feel like [poop] for no reason, it’s kind of like that sometimes,” Lewis said. “But other times, I feel up and ready for the day, and I’m just bouncing off walls and all that jazz.”

For the average person, sleep deprivation, according to an article posted on WebMD.org, (Reviewed by James Beckerman, MD, FACC), such an extreme lack of sleep would ‘[impair] attention, alertness, concentration, reasoning, and problem solving,’ all of which are key functions needed to perform well in school. Lewis, however, has experienced few signs of these symptoms, and still does well academically. For Lewis, maintaining a good GPA is an important value he holds and refuses to let a lack of sleep bring his GPA down.

The only effect Lewis claims to experience is his lack of concentration, but Lewis thinks this problem isn’t related to his lack of sleep. Instead, Lewis blames the problem not on his sleep, but on his fascination with browsing the internet after arriving home from working at theatre and at his job.

“I can’t concentrate on anything, but that might just be Craig’s list again,” Lewis said. “Maybe all of my problems stem from Craig’s list. It’s Craig’s list and mopeds, that’s all it is for me.”

In contrast to Lewis, senior Hailey Stephens gets much more sleep, but like Lewis, still experiences the effects of sleep deprivation. Stephens’ busy schedule involves participating in theatre right after school, and studying for long periods of time for her three AP classes when she arrives home. Stephens described her usual sleep habits on a typical school night.

“I try to get in bed by nine, but I’m usually not actually in bed til 10:30,” Stephens said. “I usually get up around six, so I usually get sevenish hours of sleep a night if I’m sleeping well.”

Still unlike Lewis, Stephens believes that her grades have suffered due to her lack of sleep and her busy schedule. She described how her busy schedule affected her sleep, which had in turn affected her grades, until she decided to free up some of her time by leaving her previous job Dairy Queen for time to do homework at home.

“It definitely has affected my grades,” Stephens said. “I just recently quit my job, and my grades have shot up a lot because I’m getting more of a chance to do my homework done at home instead having to go straight to work and then I get in bed a little earlier. So it does affect them, but they’re improving [now].”

“It’s putting a definite strain on my relationship because my boyfriend and I argue like 24/7 because I never get enough sleep and neither does he [because] we’re both in theater all the time,” Stephens said. “But we work it out and we’re fine. It makes me argue with a lot of people.”

For Stephens, breaking her habit of bad sleep whenever she can offers an extreme amount of relaxation. Stephens described how usually getting enough sleep instead of following her usual sleep routine has positively affected her.

Another person who experiences such a busy workload is senior Erik Reese. Reese experiences a lack of sleep due to working during most of his time outside of school, along with participating in school sports as well. Reese participates in varsity soccer and varsity volleyball outside of school, works a job at both Smoothie King and Lid’s Locker Room, and studies for all of his classes as well. Reese described his usual schedule he experiences each school night.

“I don’t get a a lot of sleep because of things like sports, school, work.” Reese said. “I’d say I work four out five nights of the school week, usually four to five hour shifts.”

Like Stephens, a lucky night with extra time to sleep is a gift for Reese. Reese explained how getting more sleep than he usually does benefits him for the rest of his day.

“It helps to get a lot of sleep. It’s a lot easier to stay awake, even if I only get an extra half hour of sleep.” Reese said.

On a typical day, Reese gains a little amount of sleep due to trying to stay caught up with his academics. Reese described how his lack of sleep is needed, however, as he uses his spare time to study for his classes, and how it hasn’t really affected him academically.

“Usually [I sleep] about five to six hours a night,” Reese said. “I don’t think it has affected me academically because usually the reason I stay up is for academic things. So even though I’m losing sleep it benefits me.”

As far as affecting his personality goes, Reese claims that it has little to no effect on him. Like his academics, Reese believes that his lack of sleep doesn’t have affect much of his mood, and really only makes him tired for the day.

“I don’t think it really affects my mood,” Reese said. “I mean, I’m tired if that’s considered a mood, but you get used to it.”

After looking at each of the few examples of sleep deprived students in FHC, a question is raised concerning the effects of sleep deprivation. Does a lack of sleep negatively affect a student’s performance in school, or does it not play a factor in a student’s academics?

Well, judging from the three previous people mentioned, it all depends why one is losing all of their sleep. Sure, if a person is missing out on a chance to sleep because they’re busy working and participating in clubs and sports outside of school, they’re going to have some difficulty maintaining their grades in school, as seen with Stephens, who said her grades shot up finally when she freed up some of her time by quitting her job. But on the other hand, a person who has a lack of sleep because they’re quite busy studying and doing homework may have excellent grades in school, as seen with Reese who stated his lack of sleep was mostly because he decided to stay up for his academic responsibilities. And then there are those who defy all logic by getting nearly no sleep at all and still maintain pretty decent grades, as seen with Lewis. who had nearly no sleep at all each school night but maintained a relatively high GPA. So really what it comes down to is that sleep deprivation will certainly make you tired and feeling drowsy, but whether it affects a person’s academics all depends on what that person is losing their sleep for exactly.