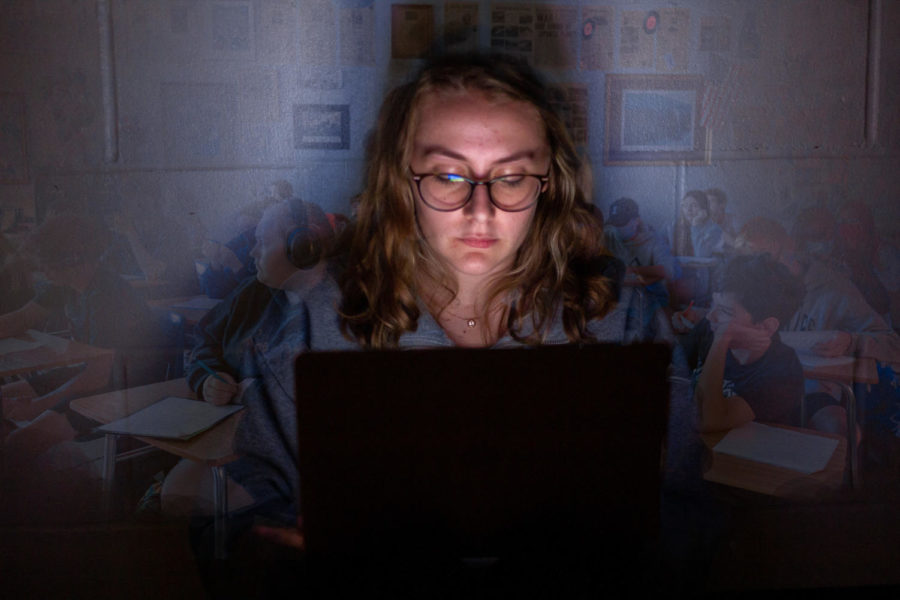 Senior Lauren Sirtak walks into the school building, smiling at her friends and heading to her first hour Human Body Systems class. An involved student ready to enjoy all of the wonder and excitement of her senior year, Sirtak’s year looks incredibly different from her virtual junior year – as it does for all students returning to in-person school.

These students, who were virtual for over an entire school year between the original outbreak of COVID-19 and this August, visually blend in with the rest of the student body as they walk through the halls and sit in their classes. But their experience is anything but blended with that of their peers who spent last year in- building. While they didn’t have the sameconcerns with frequent quarantine or the sheer amount of potential exposure in the school setting, they experienced their own unique challenges – not the least of which was disconnection and isolation from their school community.

For Sirtak, this struggle of constant separation was a defining feature of her virtual junior year. Despite being a social person who loved being inside the school building, Sirtak made the decision to stay virtual for the 2020-2021 school year to protect a close family member who was immunocompromised.

“I was worried that I was going to catch [COVID-19], or I was going to be the one to give it to them and I didn’t want to be that person,” Sirtak said.

However, this decision came with a lot of sacrifice. Going from being incredibly involved in her school and outside community, Sirtak faced the very abrupt change of interacting with her peers only through small, black squares on a screen. This led to a development and worsening of depression for Sirtak, who admits that her isolation from others and the environment of online school had a very negative impact on her mental health.

“It was hard to stay in touch with people, so it was easy to just give in to not being as close with people anymore,” Sirtak said. “I definitely slept a lot more during the day and was more unmotivated to do schoolwork than I usually was.”

For Sirtak and her family, this was the biggest factor in her decision to come back. With her family feeling more safe and secure due to vaccinations, Sirtak was excited and ready to head back into school in August.

“It felt like a relief [to be in-person], like my life was finally unpaused again,” Sirtak said. “I’ve been waiting to come back since I left and now I’m back, it’s a relief.”

This excitement was shared by sophomore Xavier Hood. While involved in Marching Band and able to experience the school community throughout the first semester, Hood attended all of his classes virtually. Similar to Sirtak, Hood made the decision to stay home to protect himself and those around him from the spread of the virus. He also experienced the disconnection from his school community in his virtual classes.

“No one really talked, there were no cameras [kept on], there was no one really there,” Hood said. “It was just basically being by yourself in your room all day, every day, and it was just so different from the years before.”

Hood also notes that virtual learning made doing well in classes much harder, as he didn’t feel he had the same connection with teachers and students as in years past.

“My grades definitely dropped,” Hood said. “[Being back in-person] they have improved. It’s been a lot. I just learn a lot better without the distractions from being at home.”

The gaps in academic learning for virtual students are also something that has not gone unnoticed. Whether it’s due to gaps from virtual classes or simply from the prevalence of quarantines last year, it’s something math teacher Mrs. Brittany Williams says is evident in her classes. “You can definitely tell that there are some learning gaps, there are some things I’m used to my Algebra I students being able to do that they just can’t do,” Mrs. William said. “I think their transition socially has been okay, but there are just some gaps.”

“I do miss the asynchronous days, and I know a lot of the students coming back into in-person, they’re struggling with the workload because the workload is all of a sudden increased again,” Williams said.

Even for students who have been taking the academic and social shifts well, there are still other hurdles to jump. Coming in as a sophomore has been a challenge for Hood, who has experienced some of the typical freshman struggles as a sophomore new to the building. He notes that navigating the building was particularly difficult during the first two weeks.

“It was really confusing just trying to get around in such a big building. I got lost many times and had to ask teachers [for help]. I was late to classes, it was just so big,” Hood said.

However, while he did share some struggles with the Freshman, Hood wishes the school had been more mindful of the differences in the experiences between freshman and virtual sophomores when planning to help them adjust for the year, particularly at Transition Day. This year, the freshman and the sophomores who had been virtual attended the day together.

“It made it more difficult, because… I’ve seen some of the places just coming to school events during Freshman year. But then we were just spending the whole day going through things the Freshman have never seen,” Hood said. “I didn’t learn things about the school that would have been more important to me.”

Similarly, Sirtak wishes the school had made more of an effort to support students coming back virtually. Because so many students struggled with their mental health during their virtual year, she feels the school should have made more of an effort in the first several weeks to check in on student’s well-being during their transition back and make sure they were doing okay.

“I think [the school] probably should have… set time to talk to each of the virtual students to get them back and really be able to communicate with them how they’re doing,” Sirtak said. “Where they feel more comfortable to tell how they’re truly feeling, and they can go over some more extensive ways to bring a solution to that.”

However, there are many aspects of the transition that Sirtak has appreciated, such as being able to start fresh with new extracurricular involvement. Prior to the pandemic, Sirtak played softball and soccer for both FHC and select teams. This year, she has changed it up.

“I’m in girl’s golf this year and I’m in Central Outreach, HOSA, and NHS,” Sirtak said. “I like getting a new start, because it’s not going back to what it once was. It’s good to accept the changes that happened and it’s nice to get a new start on different activities and stuff like that.”

Despite the difficult year virtual students endured and the things students wished could have been changed, Sirtak believes everyone was doing the best they could in the middle of a difficult and unforeseen situation.

“It was definitely hard on all of us, including the school. I mean, although I think that they could have done a lot of things better, I get that it was new for everybody and sprung on everybody at once,” Sirtak said. “It wasn’t a good experience for many people, including myself, but I’m not holding a grudge against the school. It’s not their fault. It was an incident nobody could prevent and they tried their best, I think.”